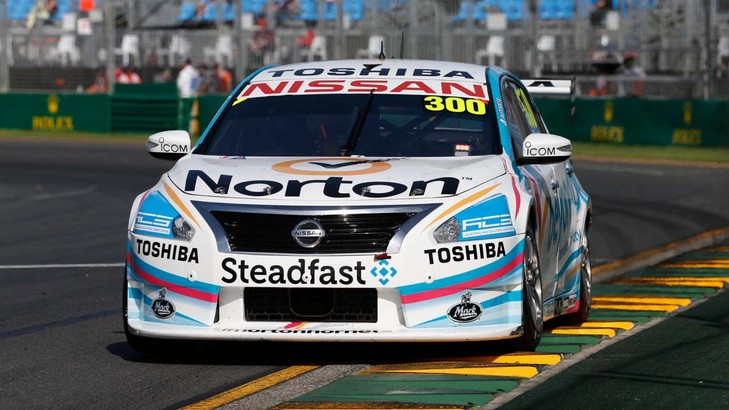 Michael Caruso has topped the final practice session at the MSS Security Challenge at Albert Park, with qualifying to come later this evening.

Caruso was second in the earlier session, but jumped to the top of the times this time around with a 1min56.2358, recording the quickest lap by a V8 Supercar today in his Nissan Altima.

He predicted times would be even closer in qualifying later on.

Just 0.17sec behind the white Nissan was Mark Winterbottom in his Ford Pepsi Max Crew Falcon, with Scott McLaughlin and his Volvo rounding out the top three.

Jamie Whincup, Todd Kelly, Will Davison, Shane van Gisbergen, Tim Slade (who was fastest is the first session with a 1min57.3497), Craig Lowndes and Dale Wood also made the top 10.

Slade was the highest placed of the Walkinshaw Racing Commodores by far, with his stablemates back in the pack – Clipsal 500 winner James Courtney 21st, Garth Tander 22nd and Nick Percat 24th.

Similarly, Wood was the highest of the three Brad Jones Racing Commodores, with Jason Bright 19th and Fabian Coulthard 23rd.

Who was on better rubber? Who is saving their run for qualifying? Stay tuned for the session, kicking off at 6pm local time, and follow on the v8supercars.com.au Lap by Lap.

Slade tops Practice, Ahead of Nissan and Volvo

Michael Caruso  ›
15' Nissan Motorsport ›
2014 Formula 1 Rolex Australian Grand Prix  ›
Stay In The Know
Sign up to the Virgin Australia Supercars Championship Newsletter
We use cookies to ensure that we give you the best experience on our website. If you continue to use this site we will assume that you are happy with it.Ok