Can we rename Barbagallo ‘Lowndes Raceway’? 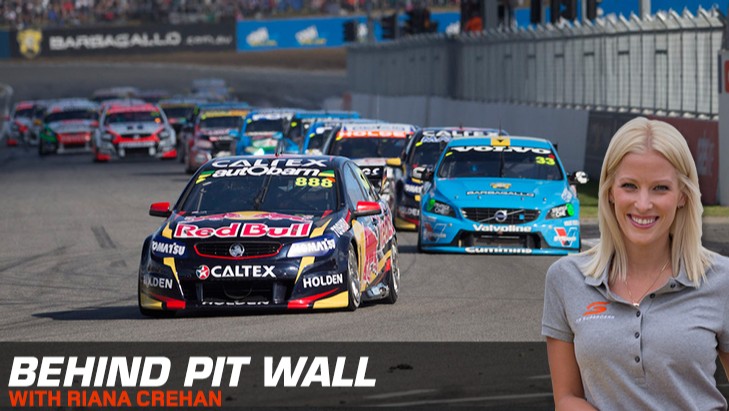 As some of you may know, I'm a very proud Perth gal and get excited each year when it's time to head west with the V8 Supercars.

It's a long trip for everyone, but well worth it - I truly believe it's the best place in the country. Just ask Garth Tander, I'm sure he'll agree!

It has been a month-long break from the on-track action, with six-time V8 Supercars Champion Jamie Whincup currently sitting 19 points ahead of James Courtney at the top of the leader board. He's earned two wins and two ARMOR ALL Pole Positions so far this season, with Courtney also consistent with four podium finishes under his belt, and three of the Prodrive Racing (Australia) cars featuring in the top 10. I think there's been a good mix of results across the two Championship events so far.

Barbagallo Raceway - originally known as Wanneroo Raceway, given its location - was renamed in 1993 after Alf Barbagallo sponsored the circuit.

But after 15 ATCC/V8 Supercar wins - more then any other driver at any other track - some would argue it should be named Lowndes Raceway!

For some reason Craig and Barbagallo dance so well together, he won here on debut in 1996 and went on to win 12 straight, the only way anyone else got a look in was when he went off to race F3000.

Lowndes heads to Perth this weekend sitting on an unbelievable 99 V8 Supercar Championship race wins. In 2013 he broke the all-time winning record, surpassing Mark Skaife here at Barbagallo with victory number 91. So, it would be quite fitting that at the circuit where he holds the most winning record he take the record for the most wins of all time - number 100!

He is in mega form, coming off the back of an almost perfect weekend in Tassie where he took three pole positions and two wins. Something tells me we could witness something seriously special this weekend - something I am sure we will be talking about for a very long time.

Barbagallo Raceway, like Tassie, looks small and simple but has provided some exciting racing in the past. The track is surrounded by sand, creating super tricky conditions for the drivers, and it's very difficult for the engineers to set up a well-balanced car. The surface is extremely abrasive and car balance is vital to ensure optimal tyre life.

Last year soft tyres were used for the entire weekend however this year we will replicate the format from Tasmania. Hard Dunlop tyres will be used for all sessions and races on Saturday, but Sunday's Race Nine will see one set of soft tyres need to be used in combination with hard tyres.

This weekend will also see the introduction of the Beru F1 tyre sensor systems. At Barbagallo last year we saw many delaminating tyres and punctures, believed to be caused by teams using low pressures trying to get longevity out of the soft tyres. With the implementation of regulation tyre pressures (17 psi) and the new sensors, this will make it harder to push the tyres to extreme limits. It is obviously much safer for the drivers, however tyre life could be affected.

That will definitely make the races very interesting, as tyre management will be key. Which drivers can manage their tyres the best and which cars look after them get the best gains in the end. We never know until the end!

- I have no doubt Lowndes will head to Victory Lane at some stage throughout the weekend.

- Shane van Gisbergen needs to improve his poor form at this circuit. In 2014, he was last in race one, and 20th in race three.

- Erebus, fast here in 2014, will definitely be expecting a podium result after Tassie.

- HRT hasn't had a great run in recent years, the team needs to find form at weak tracks if the cars are going to be genuine title contenders.