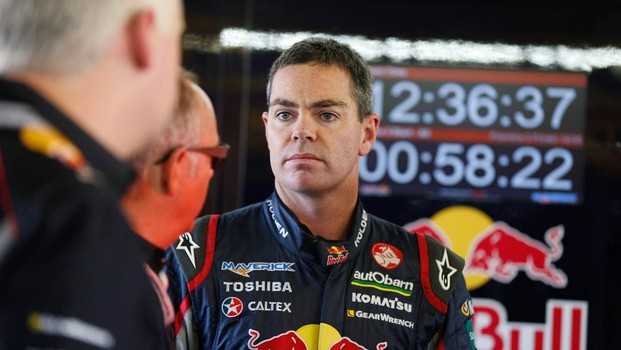 Red Bull Racing Australia's Craig Lowndes and Jamie Whincup were top two in Qualifying, but can the team clinch its first ever ARMOR ALL Pole Position at Hidden Valley Raceway in the Top 10 Shootout this afternoon?

The pair left their runs until late in the session, but Lowndes was quickest with just 17 seconds to go.

And while Lowndes has had one start from first on the grid at Hidden Valley Raceway, it was back in 2000 with Holden Racing Team. Current Champion and points leader Jamie Whincup has never had pole here.

In fact, Ford Performance Racing has had five of the last six pole positions at the circuit.

Lowndes was quickest in Practice Two yesterday and was happy with the feel of the car then.

"The car's been working really well – everyone as drivers is frustrated at times because we don't have the tyre banks to do the whole, good quality practice, so we were very mindful of that. Yesterday was good, we got what we wanted to achieve quite early in the practice sessions and could see what the car was going to be like on an old set of tyres at the end," Lowndes said.

"But we were confident and happy the car was going to be good.

Lowndes said there wouldn't be many changes when transitioning from a qualifying car to a shootout car.

"There's not a lot of difference, because we were doing our lap times on the first lap – though we had to do it on the second lap on that last run because I buggered up – but other than that the car was quite good on the first lap, so really not a lot of changes for us.

"We'll have a good look at the car and see whether we can make it a little bit sharper, which is what we want for the one lap. But the biggest change will be from top 10 back to a race car."

And while there have been whispers of drama into turn one, Lowndes talked down the importance of being on pole for the race this weekend.

"I think that it would be nice to be on the front two rows to stay out of trouble, so really the first part of 60/60 is all about getting grid position for the second part of it.

"I've been dealt the ugly side of that at Tassie when I had an altercation with Shane van Gsibergen, so you've just got to stay out of trouble for the first part of it.

"Being at the front's always nice to stay out of trouble, but the first couple of rows around here, you should be right."

Jamie Whincup  ›
15' Red Bull Racing Australia ›
2013 SKYCITY Triple Crown  ›
Stay In The Know
Sign up to the Virgin Australia Supercars Championship Newsletter
This website uses cookies to improve your user experience. By continuing, you will be providing your consent to our use of cookies.Ok