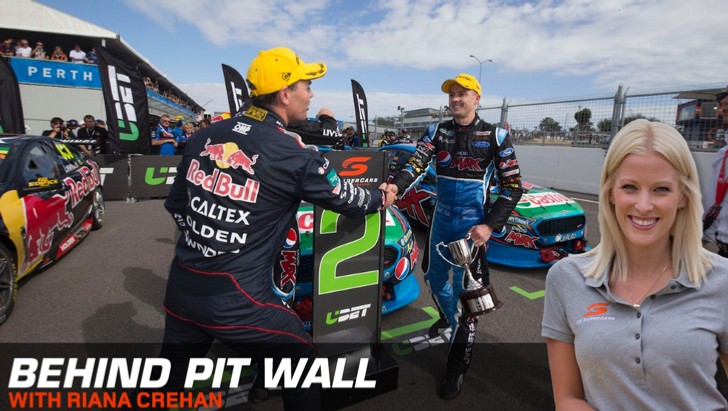 Seeingthe Red Bull Racing Australia 888 car beneath the greatest podium in Australian motorsport cemented what we had all known for a very long time.

Craig Lowndes - three-time V8 Supercar Champion, six-time Bathurst winner, 101-time V8 Supercar race winner - is without doubt the peoples Champion. The most popular man in our category by a Bathurst 1000 - I have never experienced an interview situation quite like that. I looked up for a brief moment to take a peek at what CL could see and there was an ocean of people chanting his name, it was something quite incredible.

So, the question is, can he do it?

Three hundred and 99 points is what he needs.

Mark Winterbottom - the long-standing enemy, Pepsi Max Crew and Ford's number one man - comfortably leads the charge and has done so Race 12 at Winton back in May.

Lowndes has sat by his side relatively consistently since Frosty took the lead from him.

There was a recent surge from young gun Mostert, but now he's sadly sidelined with injuries, it's basically down to a two horse race.

Many have said it's over, there is no way back, but we still have 1200 points on offer, four events left, even if it's just for the hopeless romantics who would love to relive the scenes of CL hysteria at Bathurst, can we just for a minute be glass half full?

2015 has seen Lowndes clock up four wins and 11 podiums, but his recent qualifying results have been part of the trophy slipping further away.

He has qualified outside the top 10 for the last four races straight including a 23rd (his season worst) at Sandown.

Winterbottom has had nine wins and 15 podiums from 25 races - the most in the field - and has 12 front row qualifying results.

As far as numbers go for the Surfers Paradise street circuit, well, they fall into the lap of Winterbottom. Lowndes has three wins, two poles, five podiums from 40 starts but also has five DNFs. And has only managed to qualify on the front row four times from 24 attempts. Frosty, on the other hand, has two wins, two Poles, 10 podiums from 26 starts and astonishingly a 100 per cent finishing record!

Add to that the fact no one in the history of a V8 Supercar race has ever won outside of the top six.

Winterbottom's record is impressive, particularly his consistency, however Lowndes has the most recent victory and pole position in 2013 (with Warren Luff).

Numbers can mean a lot. They can also mean nothing at all. What can mean something is current circuit form.

Townsville would probably be the most similar street circuit we have been to this year in regards to car setup: Mark Winterbottom won back-to-back races. And Sandown also bares similarities to the GC600 circuit with the need to handle kerbs, big braking points and sharp 90 degree corners: Mark Winterbottom and Steve Owen won with PRA taking home a strong 1-2.

They are the facts.

After Bathurst, Lowndes said he predicts Prodrive Racing to bounce back strong this weekend, he is not giving up on the title but he is kind of facing a small Mount Everest.

In simplest terms - 300 points up for grabs this weekend. Frosty's history is good; CL must qualify well and stay out of trouble. He cannot afford any risks this weekend at all.

Everyone wants this fight to continue right up until Sydney Olympic except for maybe Frosty and Tim Edwards. But for the sake of the diehards, we will continue to pose the question - can he do it? Can he spoil the Pepsi Party on the GC?