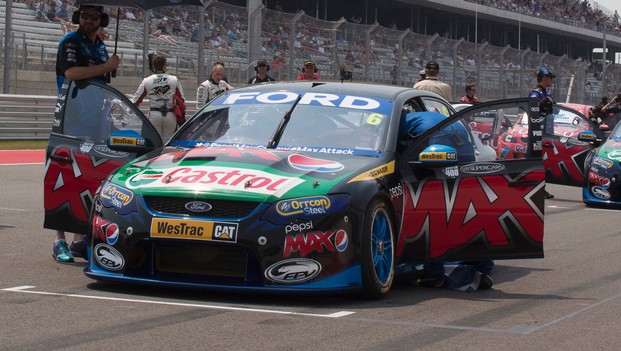 Ford Performance Racing hasconcluded a busy yet successful day of testing at Winton in northern Victoriawhere all four of the team’s Endurance Cup co-drivers got to sample their newrides for 2013.

“I think it has been areally good test today,” he said. “You never get carried away with testing buttrack conditions were perfect and the car felt good all day.

“We made a lot of positivechanges and I really enjoyed the car, which is always a good sign. We triedsome very interesting things on the car and they were quite promising so it wasgood to get such a positive response. I am really excited to continue workingwith these new developments for the next few races so I can’t wait to get toDarwin.”

Owen – who drove theCar of the Future Falcon for the first time today – was glad to get sometime in the car.

“It was good to get somelaps and get a feel for the car and the team,” the former full-time V8 Supercar driversaid. “We did some pit stop practice and some different length stints so it wasa busy day. I use Will’s belt position and seat insert and I like the way hispedals are set-up, so I haven’t changed anything at all which is great.”

Mark Winterbottom was absentfrom the test so his co-driver Steven Richards had the car they will sharealmost exclusively to himself, aside from a handful of laps for FPR rising starChaz Mostert who assisted with pit stop practice.

David Reynolds resumed hispairing with Dean Canto who had his first taste of the 2013-spec Car of theFuture Falcon, while Alex Davison was joined for the first time by JohnMcIntyre, who also had his maiden run in the new car.

Canto was surprised at thefeel of the new car. “I was expecting the car to be massively different to theold one but it reacts nicer and it is quite a refined package,” he said. “Thatsaid, the tuning window seems to be quite small so it is still a learning curvebut I was very impressed. I am really looking forward to getting in the caragain soon.”

McIntyre enjoyed his run inthe car and said it was ideal to sample it in “so many different guises”.

“The car has been consistentand handled well so it has been a productive day,” the #18 co-driver said.  “Alex and I are gelling well and the car isreally comfortable so that has meant we’ve just been able to get on with ourprogram which is what you want.”

All eight drivers workedacross an extensive program of developments while the crew took part innumerous pit stop simulations throughout the day.

Steven Richards  ›
15' The Bottle-O FPR Ford ›
15' Pepsi Max Crew ›
2013 Wilson Security Sandown 500  ›
2013 Supercheap Auto Bathurst 1000  ›
2013 Armor All Gold Coast 600  ›
Stay In The Know
Sign up to the Virgin Australia Supercars Championship Newsletter
This website uses cookies to improve your user experience. By continuing, you will be providing your consent to our use of cookies.Ok