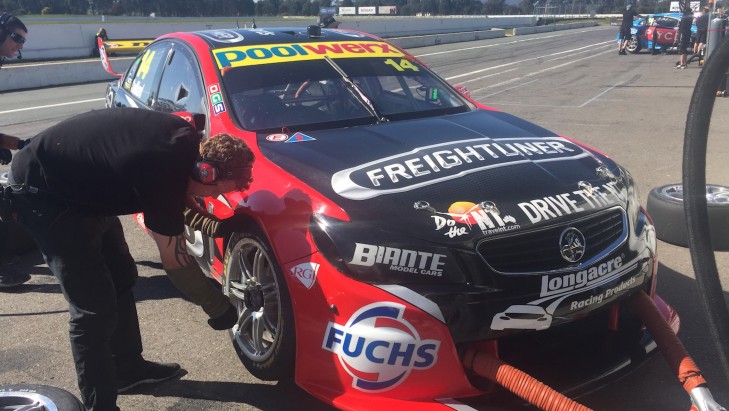 It's all systems go today at Winton, with four Victorian teams out on track and utilising their single independent test days ahead of the Wilson Security Sandown 500.

The teamswere greeted with fine conditions this morning, with drivers and co-drivers having had laps in the cars.

BJR has already managed to work through a number of setup changes, run co-drivers on decent tyres, and will be focused on driver changes and the usual enduro preparations this afternoon.

"We're getting through a fair bit at the moment - we've got a fair bit to test, but the majority of the test day will be about driver changes, pit stop practice, brake changing - all those sort of things we like to do before an endurance round," BJR team manager Chris Clark told v8supercars.com.au.

"Everybody seems to be getting around nicely, lap times are looking good, so it's all good."

He said the team had been there since the gates had opened, and all was running smoothly.

"We're getting into the warmer part of the day, so we'll get into the logistical side of pit stop practicing, setting up the pit bays, getting the booms all ready ... we brought the rest of the crew who are normally on the shop floor, they've just turned up so we could run through the pit stop stuff."

Co-drivers Luke Youlden (Freightliner Racing with Fabian Coulthard) and Andrew Jones (Team BOC with Jason Bright) are seasoned drivers and experienced with the team, while third co-driver Macauley Jones will debut in the V8 Supercars Championship for the first time with Dale Wood.

"Macauley and Dale are doing a little bit of after hours practicing - driver change stuff - those are the sort of things you've really got to focus on with a new driver so they can get used to the team," Clark said.

"Pit stops where pads are changed, pumping up the brake pads, they are the sorts of things we really need to be instilling into a younger driver."

While BJR is yet to win an endurance race, the team has had good showings at Bathurst before. When asked if he felt whether they were in a position to go one better, Clark said: "I always feel like we should go good. Enduros are a funny old thing, we've come second a lot of times at Bathurst and we've had a lot of good results up on the mountain - it's just a case of hopefully all the planets lining up.

"All we can do is make sure logistically we have all our ducks in a row and that's what we strive to do every year."

"We're blazing around, we've got cars going everywhere, drivers jumping in and out, mechanics twirling the spanners, and we're going to get to lunch - there's a summary for you, how'd I go there?" he told v8supercars.com.au.

GRM has French co-driver Alex Premat in the #33 after sharing with Scott McLaughlin through the enduros last year.

Chris Pither slots into #34 with David Wall, after replacing an injured Wall at the Australian Grand Prix earlier this year, and Rogers said both were running well.

"They've got a handful of laps, both going ok," the team boss said.

"There's obviously always some little thing the mechanical minds want to try, so we're doing a bit of that at the same time."

Prodrive and Nissan have also reported smooth running, with Edwards telling v8supercars.com.au ahead of the test that the team would be working on "really exciting stuff".

Nissan has international Alex Buncombe in the newly coloured carsales Altima, who has recently arrived from Britain.

Rick Kelly wouldn't give anything away on upgrades for the Nissans for Sandown.

"What I'll tell you on our development is we're working as hard as we can to make the car competitive in all areas and we'll be testing a variety of things," he said.

"So I'm excited to ... refine the things we've been working on and then head to Sandown to see if we've made progress from 12 months ago when we were there last."