While DJR Team Penske determines whether car #12 can be fixed for tomorrow, other teams are predicting midnight finishes after sustaining damage at the concrete-lined Surfers Paradise circuit today.

The Team 18 entry of Lee Holdsworth/Karl Reindler, Lucas Dumbrell Motorsport’s Nick Percat/Cameron McConville and Prodrive’s Cameron Waters/Jack Le Brocq were all unable to finish the race after finding the walls.

It was a fall from grace for the LDM and Prodrive entries after finishing third and fourth at last event the Supercheap Auto Bathurst 1000.

It’s all hands on deck – even smash repair sponsor Phil Munday was working on the car down at LDM.

The entry driven by McConville was tapped by Ash Walsh on lap 20 at turn 11, ending the day before Percat ran a racing lap.

“I think our one will definitely be out tomorrow,” Dumbrell said.

“Unfortunately it’s all that time consuming stuff – the sheet metal, the front rear – we managed to scratch pretty much every single side, so we have to replace every single panel.

“We’ll get it out tomorrow – as you’ll see Phil Munday our major sponsor is in there helping, so we’ll be fine, no question.”

Le Brocq took responsibility for his accident on lap 23 in the Monster Energy Falcon.

"The guys are well into it, there’s no chassis damage at all, so it’s a mere flesh wound.” 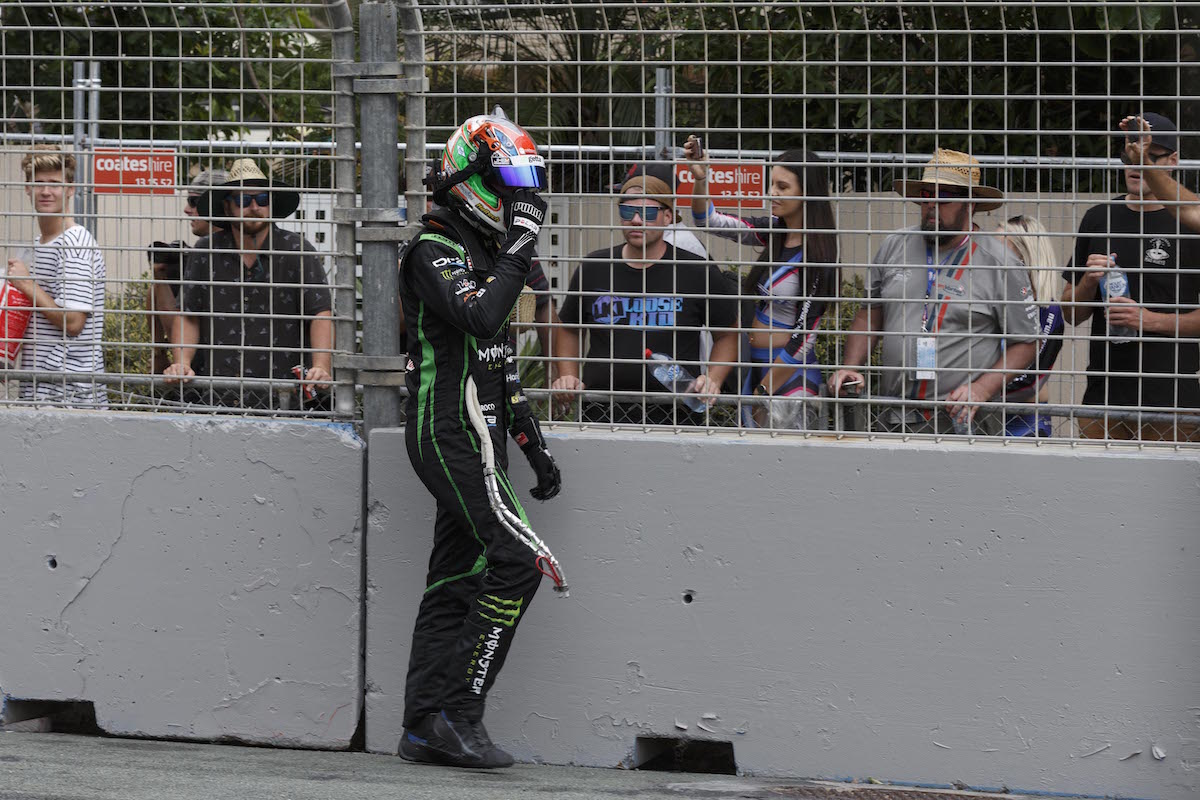 The hard luck continues for the Preston Hire-backed Team 18, with its Bathurst campaign ending on the starting lap with an engine issue. Holdsworth qualified seventh but did not get a run with co-driver Karl Reindler finding the wall on lap 35 after surviving a lap one incident with the TEKNO Autosports car driven by Jonathon Webb.

Team boss Charlie Schwerkolt was disappointed with the end, but looked at the positive of qualifying.

“Unfortunately a rare mistake from Karl – he hit the wall at, I think it was turn two,” Schwerkolt said.

“Just glanced the front, did the upright – he did well to save it. A new front upright on the left, new right rear as well, a bit of bodywork and we’ll be all good for tomorrow.

“Not too big a night, probably a midnight job. We’re in reasonably good shape, no structural damage on the car … it was just one of those things.”

Schwerkolt was unsure whether there were any issues after the early contact with Webb’s car that may have contributed.

As previously reported, DJR Team Penske has taken Fabian Coulthard’s Falcon straight to PACE Innovations for a potential rebuild overnight. The team will announce later tonight if it can be done for tomorrow’s race at the Castrol Gold Coast 600.

War of words after high-speed smash