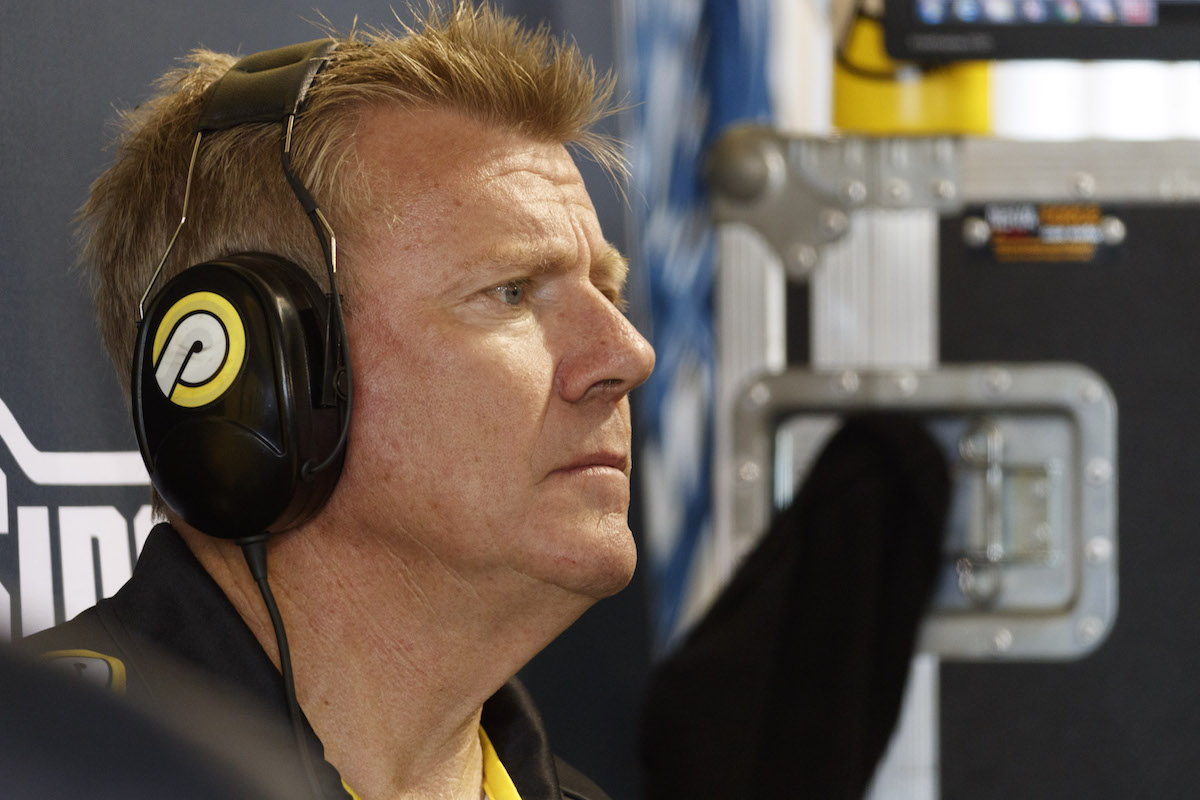 The debut season of Charlie Schwerkolt’s new team, Preston Hire Racing, has been defined by the accident in Darwin that put Lee Holdsworth in hospital and destroyed the team’s Holden Commodore VF.

All-up Holdsworth will miss three events as he recovers from his various fractures, while the team’s finances have been dented by the unavoidable decision to have Triple Eight Race Engineering build a brand new car to replace a now worthless wreck.

It was hardly the sort of catastrophe any team needs, let alone one only a few months old and still going through its birth pains.

Schwerkolt, an investor in Dick Johnson Racing back in 2008-10, bit the bullet and decided to go out on his own after three years back in the category running as a customer of Prodrive Racing Australia and Walkinshaw Racing. He enlisted the aid of former HRT boss Jeff Grech to pull the operation together over the summer and also recruited engineer Jason Bush from Clayton to run the ex-T8 chassis.

Early in the season there was pace in qualifying and issues in the races as slow pit stops prevented better results. But since Holdsworth’s accident it’s been a case of survival rather than progress, with Kurt Kostecki stepping up from the Dunlop Series – along with his Commodore – to race for the team.

At the Red Rooster Sydney Motorsport Park SuperSprint the team’s Pirtek Enduro Cup co-driver Karl Reindler will debut the new car, with Holdsworth due for his first run immediately after that event.

Hopefully, it’s onwards and upwards from there.

Standout moment this season: Qualifying on rows two and three at Symmons Plains was an early indicator of progress. Out-qualifying the Triple Eight ‘factory’ cars at Winton another mighty achievement. That Lee Holdsworth is still with us after that shocking Darwin accident is a highlight in itself.

VASC: Assess the year so far.

CS: It doesn’t get much tougher. Putting the whole thing together in such a rush and at short notice and then having the monumental crash is such a setback and such a disappointment.

We were starting to get some results and build some momentum as we hoped, so I am not disappointed in that way. But it’s certainly not where we want to be. It wasn’t part of the plan to have this major setback.

Give us the injury update on Lee and when you expect him back.

It is tracking along really well and he is dying to get in the car.

He is out of his wheelchair which is really good. He is going to a walking frame and then crutches next week. Our goal is for him to sit in a car at Sydney Motorsport Park. It would be a dream if it was in the practice session, but I doubt it. There is a ride day on the Monday afterwards (at SMSP) and we don’t want to rush it, so that’s where it is sitting at the moment.

It is all work in progress at the moment, (Supercars medico) Dr Carl is overseeing it and we are still a few weeks out. We’re keen to get him back in and he’s keen to get back in so we will just see how it goes.

Realistically, I am sure he will be in for the ride day.

Putting the accident to one side, what have you made of Lee as a racing driver?

He has been through a bit of a tough time in previous years and I believed in him and I still believe in him that he can do the job. He is an incredible guy, he is trying his hardest to make this all work and he really is putting his heart and soul into it. I believe he will get the results.

His dedication, his professionalism, his determination to strive in this sport is undoubtedly second to none.

Since the accident have you regretted taking this course and setting up your own operation?

No, not really. It’s part of it. In any motor racing or elite sport there is a risk of injury. As I said, I didn’t expect the injury and that is a big setback. We can always go and get another car, we can rent a car, we can fix a car, but something like that (accident) and not having Lee is a big thing for us. So it is major setback, yet obviously we have been blessed in having Kurt Kostecki and Karl Reindler come on-board and assist and we just have to regroup and get on with it.

You did have plans to upgrade to a new car for 2017, but you had also expected to have a car to sell, which you now don’t have. How badly have the finances been hammered?

It’s a big dent in my budget for sure. But you always have a damage factor in your budget but it’s sort of double that and a little bit more. So I will just have to work harder and attract a couple other little sponsors. We have some amazing sponsors on-board, but it certainly hasn’t changed my tack on the whole thing at all.

You pulled together a group of people to form Preston Hire Racing pretty quickly over the summer. What have you learned about them through all this?

I have an incredible team of people. We have no team without the people we have got and all the people we have through my businesses – which are all built on fantastic teams – have all dug in. It’s an incredibly tough time for the race crew, some are up in Brisbane working away (on the new car), some are in Melbourne (at the workshop). It’s bonded them strong for sure, it’s incredible. They have all been hand-picked and it’s tough on them as well. They have been strong through this poor situation.

Recruiting former HRT boss Jeff Grech as team manager after a few years out of Supercars certainly got everyone’s attention. How has he settled back in?

Jeff is an incredibly passionate guy about our sport and he was keen to get back in as I was keen to get him back in. But the sport has changed and probably one of the biggest factors is the cost. There are a lot more costs today. And the organisation and the structure and all that sort of stuff.

He is learning and he is coming to grips with it all. It didn’t take him long, he is right back in there, giving orders everywhere and running the whole place. It’s great to have him on-board and we couldn’t have done it without him.

You share a pit boom with Brad Jones Racing’s Team CoolDrive and the efficiency of pit stops has been highlighted as damaging your results. How big an issue is that?

It’s probably the single biggest issue. I can spend hundreds of thousands of dollars on equipment and cars and trying to get tenths here and tenths there, but if I lose a couple of seconds in the pits it’s all over anyway and you drop a few spots.

But how do you make it better when you’re based in Melbourne and they are in Albury, making that vital practice between race meetings all but impossible?

It’s incredibly hard. The logistics of Albury and Melbourne and the time factor … we are practicing every time we can at the race meetings and we are slowly getting it there and improving for sure. But there’s still work to be done.

So through the disappointments and the challenges what have been the highlights for you?

I think qualifying fourth and fifth in Tassie with the Triple Eight gear that we had; it was an older car albeit still a great car. Putting that together with Lee and a new team and to be so high up the grid was pretty special. It was probably the highlight so far this year in qualifying which was fantastic.

And I think we have had two or three top 10s in races and they are results that mean a lot and I can build on. I am very proud of the team and the sponsors and what we put together in what was a six-week period at the end of last year.

So what become the racing objectives of the team for the rest of the year, considering a strong result in the drivers’ championship is now beyond reach?

The Pirtek Enduro Cup is up for anyone to grab. I have a good co-driver in Karl and we have exciting times with a brand new car. We will be trying our hardest for all our partners to do the best we can in that enduro cup.

Of course, I can’t wait for Pukekohe. No pit stops, so it’s all under our control there. I think it’s four 100km races and so that will be exciting. It will be all up to Lee in qualifying and the team and there won’t be any let-downs of any of our staff or other staff that we are not in control of.

Have you cast your mind forward to 2017 yet?

Absolutely, we have a lot going on for next year, some exciting stuff. We have fully bought into next year already.

I think consistency is the key in any elite sport so I don’t believe we will change a lot; we will just be trying to improve on where we are at the moment.

So through all this Charlie, do you still love motor racing?

You would have to ask my wife (laughs), she sees me get pretty frustrated at times. No, of course I do. It’s an incredible sport, you have to have that passion for it, which I still have and hopefully I will succeed in it down the track. No I do love it for sure.