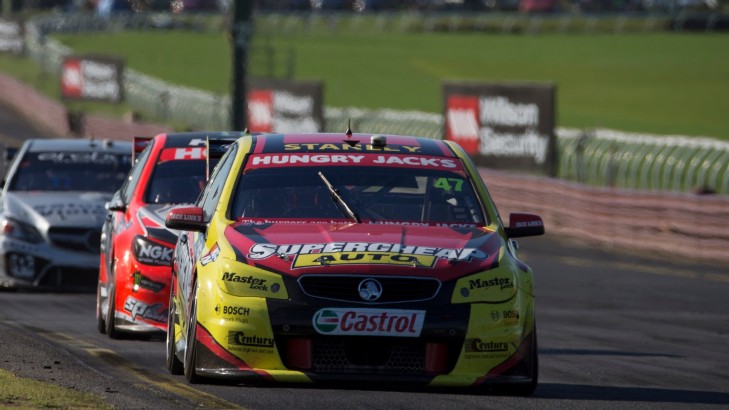 Walkinshaw Racing managing director Adrian Burgess says he is confident the stable will continue to run four V8 Supercars in 2016.

While Slade and Supercheap both have deals up at the end of this year - and the sponsor in particular has been rampantly linked to another high profile squad - Burgess emphasised that regardless of the 2016 line-up, expect WR to remain a four-car group.

"Things are progressing well," Burgess told v8supercars.com.au when asked about 2016.

"It's common knowledge there's teams, sponsors and drivers each touting themselves around the paddock.

"We're comfortable we're in a position to put four cars on the grid next year and that's the important thing for the team.

"The make-up of those cars and driver and sponsor combinations is still up in the air, so there isn't really anything to add at this point."

Burgess said the team was still in talks with Supercheap, saying they have a great relationship and "everything is still to be ironed out".

Team owner Ryan Walkinshaw said earlier this year he was hoping for four cars, but that "would depend on how the discussions go with Supercheap". However, Burgess now seemed confident they would secure the backing to continue with the same number of cars.

"From me, I'm saying the desire and the plan is to run four and I think we're firmly on track to do that, so nothing more to add," Burgess said, with little patience for the rumour mill.

Meanwhile Slade says he will know more about his situation in the weeks coming into Bathurst, but is not letting negotiations distract from his racing. He added that Supercheap - which he has a relationship with back from the Paul Morris days in 2009 - had been a loyal and open partner.

"Not really [any news on 2016] - I'll probably know a little bit more in the next couple of weeks what's going on," Slade told v8supercars.com.au.

"That's sort of the stuff you work on between race meetings and when you get to the race meeting you switch off that mode and switch into race mode.

"Definitely when you've got your helmet on - it doesn't mater what car or category you're in - as soon as you put your helmet on and get onto the race track you want to be the fastest bloke out there. That doesn't really change no matter what's going on outside the race car, put it that way."

His results this season have been less consistent than he would like, though a podium in Darwin and two top 10 finishes in the last two races at Sandown and Sydney Motorsport Park were highlights.

"Having four in the 10 is definitely an improvement from where we consider we've been for the last four or five events, so encouraging to have competitive cars and reliable cars for the first of the enduros," Burgess said.

"We want to be winning races and on the podium on a regular basis - but first you've got to learn to walk again before you can try running and the middle of the season has been tough.

"So hopefully it shows that we've turned a corner and we've got a direction that's bearing fruit again.

"So definitely encouraged ... we've just got to carry on doing a good job and keep building on the momentum we're starting to generate and hopefully we're challenging for race wins and on the podium on a regular basis - that's where we want to be."