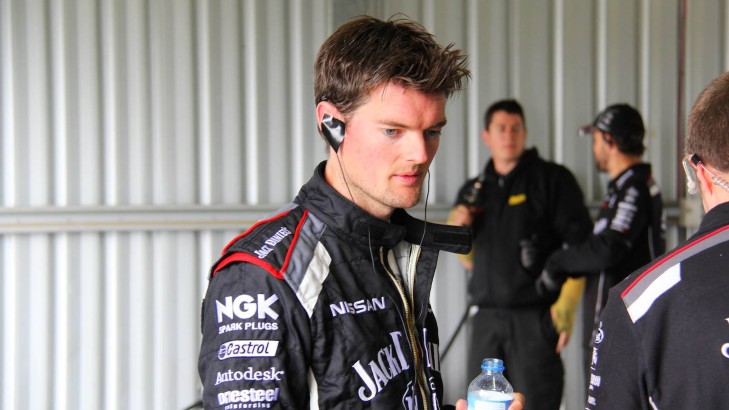 While some teams decided to end the day in case forecast rain affected Winton Raceway, Nissan Motorsport hit the track and has cut laps in wet and dry conditions.

With international co-driver Alex Buncombe enjoying his one and only test day prior to next week's Wilson Security Sandown 500, the opportunity to run in all conditions was a positive.

Team boss and Jack Daniel's driver Todd Kelly was impressed with his co-driver's progress in the Nissan Altima, a very different beast to what the Brit is used to.

"The car's got very little grip and it's very easy to lock a front tyre and run off the track, especially at Winton in these kinds of conditions.

"The cars are a lot harder to drive in that scenario too - (compared to) a Nissan GT-R for example that handles really superbly - but he's really got his head around it very quickly and very well.

"He was quite fast in the dry and the wet, so it's really all gone to plan and we have got the driver change sequence down pat now, so there's a little bit more time before the race meeting to have a bit more practice at that.

"But you really need to hook in - there's so many things for a driver who's not been in our series before to learn, from practice starts to how to do a driver change. He's really taken all of that on board well.

"He's done some practice starts and bits and pieces so we've really gotten through heaps of stuff... (he's) dropped a wheel off here and there, but that's pretty standard in these kinds of conditions, which is good. He's really learned the limits of the car - that's really what today's all about."

Buncombe has spent the majority of the day in the car, with Kelly having completed an estimated 15 laps around the Victorian circuit.

And with plenty on the program, including pit stop practice and tuning the Altima, it has been a productive day for the Nissan squad.

"We've done the whole team thing - the fuel stops, pit stops, pad stops, all of it. Things you might have thrown at you, like bar changes, and all of those little things that you really don't want to make a mistake on," Kelly said.

"You need to be really on the money with it at the race - coming in with red hot brake rotors, you can't really replicate that in the shop. So we had a reasonably heavy test schedule early on in the day for tuning items, but we certainly dedicated the second half of the day to pre-enduro stuff, which has worked out quite well."

Buncombe has enjoyed the time in the car, and agreed with Kelly that braking was one of the key differences to come to terms with in the V8 Supercar.

"I've come from testing a P2 (sports car) at Snetterton with carbon brakes, and obviously the Nismo GT-R, with all of the driver aids that help you along the way, then to get into the V8 Supercar is a fantastic experience.

"It's pure driving ...you've got to be so smooth with the car, and here at Winton it's the sort of track that you need to be fairly precise in the slow speed corners.

"That's where I've been losing some time, but the time in the slow speed corners will come, I just need a few more laps in the car.

"With the braking, I've been a bit late - in Europe with the Nismo GT-R you have 120 bar brake pressure, with this car it feels like you hardly touch the brake pedal, and the tyres will lock.

"I'm having to restrict myself to not go too deep on the brakes everywhere, I've had a few little lockup moments, which is actually good to have, to find the limit of the car."

While the team was met with a heavy downpour of rain in the afternoon, Kelly didn't consider scrapping the test - as some competitors did this morning - when they noted the chance of rain.

"I quite enjoy doing it like this because if there's a downpour in the middle of the Sandown 500, or Bathurst, we don't have the luxury of putting the cars in the garage, drinking coffee or going home!" the Sandown, Bathurst and Gold Coast winner said.

"You have to race in those conditions, so even the pit crew, they're out there practicing pit stops - all the rattle guns are wet and slippery, but that's all part of it.

"We had a good solid run today in the dry so I don't know why you'd go home."

Walkinshaw Racing also tested all four cars with all four co-drivers today, and will continue at Winton tomorrow, to be joined by Ford Performance Racing and Brad Jones Racing that packed up today, and Garry Rogers Motorsport.