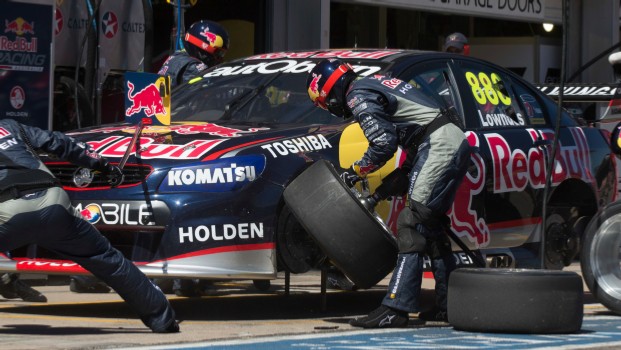 Having slipped back from first to third in the V8 SupercarsChampionship after a series of sprint races, Craig Lowndes is looking forwardto the return of pit stop racing.

“The pit stop strategy for me works well, because if youqualify poorly – and hopefully you don’t do that much – at least you can go outof sync with other people, bounce back and hopefully pick up a couple ofspots,” the Red Bull Racer said.

Lowndes was speaking to v8supercars.com.au between theTasmania Microsoft Office 365 and last event the ITM 400 Auckland. He managed toqualify on the front row once and finish on the podium (third in the openingPukekohe race) just once across the two events.

After the Circuit of the Americas event comes the SKYCITYTriple Crown in Darwin, which comprises three 120km sprints without mandatorystops, before the twin 200km races that require refuelling stops at theSucrogen 400 in Townsville.

“Teams with good strategies and fast, smooth pit stops canmake or break a race in a sense,” Lowndes added. “You can eliminate some of ourissues you have with your car by running a different strategy.”

“Like everyone we are still learning, we as a team are stillprobably learning a little bit about the car,” he added. “It is weird; we willget our head around the set-up for sprint racing. We are probably 80 per centthere.

“We came out of Adelaide strong and it was funny because thecomments were ‘nothing has really changed in the sport’. But since then it’sproved that whether you’ve got a big budget or little budget it doesn’t matter.

“The cars are all the same, it’s a matter of getting theright combination out of the car for the driver... I reckon Brad Jones Racinghas unlocked something quicker than anyone else.”

There is certain irony in Lowndes’ comments considering hewon the last of his three V8 Supercars/Australian Touring Car championshipsback in 1999 in an era when the calendar was dominated by sprint racing.

And sprint racing has made a resurgence in the 2013championship. In Tasmania on the tight Symmons Plains circuit, overtakingopportunities were rare and the racing processional. But at Pukekohe Park Raceway lastweekend the action up and down through the field was constant.

Craig Lowndes  ›
15' Red Bull Racing Australia ›
2013 Chill Perth 360  ›
Stay In The Know
Sign up to the Virgin Australia Supercars Championship Newsletter
We use cookies to ensure that we give you the best experience on our website. If you continue to use this site we will assume that you are happy with it.Ok