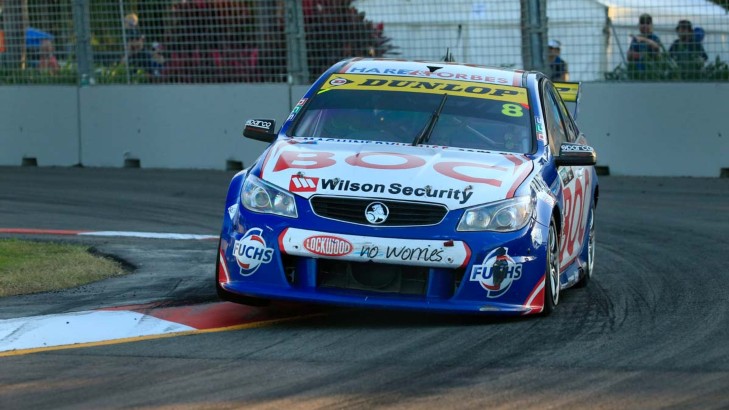 Last time Jason Bright was on ARMOR ALL Pole Position, in Auckland, he went on to win the race.

He's clinging to that idea for the upcoming 250km race at the Castrol Townsville 500 - Driven by TAFE Queensland, rather than the statistic that the last three races have been won from 10th and 11th on the grid.

"I've tried 10th and further back and that didn't work either!" Bright told v8supercars.com.au jovially.

"Last time I won a race was when I was on pole in New Zealand, so I'll take that omen!"

The 41-year old said it was nice to start from p1, and admitted the weekend had been very disappointing up to that point. Though his Team BOC Holden Commodore had been good all weekend, he only managed seventh and 17th in the 125km races.

"We've been in that top group all weekend and yesterday in the first race I felt like we had an issue with grunt or response," Bright said.

"We had a look last night and couldn't find anything. This morning in qualifying was just shocking, 20 per cent throttle before anything would happen. So we had to make a pretty quick modification between qualifying and the shootout, and fix that and the car was competitive.

"Considering we had scrubbed tyres because we had to use both sets to make the 10 I was really happy with that lap. If we'd had greens, I'm sure we could've done better."

Even his 1min13.1829 lap set during the ARMOR ALL Tope 10 Shootout was achieved with a less than perfect V8 Supercar, with a suspected throttle sensor issue.

"To be honest, we haven't fixed it yet, we just fudged the settings so it thinks it's in the right part of the throttle.

"I think it was good, it was hard on the qualifying lap because you're just ragging it but it was there. Before it was flat and I had to use first gear at corners where I'd usually use second."

Bright said it was a bit weird inheriting pole position after Lowndes recorded a quicker time - "That's what the rules are though and he obviously saved a set of green tyres in qualifying so we knew he was going to be quick. But who knows whether he just saved them because he knew he'd lose a couple of spots anyway."

The final race of the weekend, the 250km mini-marathon around the Castrol Townsville 500 - Driven by TAFE Queensland begins at 3.55pm AEST. Jamie Whincup starts alongside Bright on the front row.

Click here for the grid positions for the race.

Jason Bright  ›
15' Team BOC and Freightliner Racing ›
2014 Castrol Townsville 500 – Driven by TAFE Queensland  ›
Stay In The Know
Sign up to the Virgin Australia Supercars Championship Newsletter
We use cookies to ensure that we give you the best experience on our website. If you continue to use this site we will assume that you are happy with it.Ok