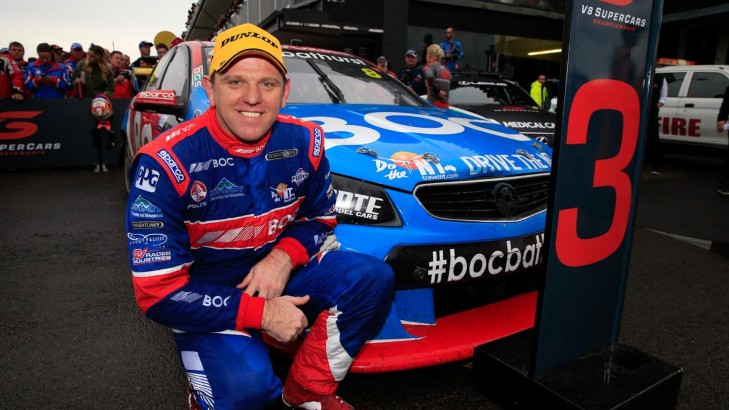 Veteran Jason Bright has declared his desire to continue racing in the V8 Supercar championship in 2016.

And his team owner Brad Jones does not seem averse to the idea, although he also says he has not given it much thought.

Nowadays, Bright and Jones do their deal year-by-year based on a handshake.

The naming rights sponsor of Bright's Holden Commodore VF, BOC, is also on a year-by-year arrangement with Brad Jones Racing.

"As long as I can still go out there and qualify in front of a lot of younger guys, hopefully I will still have a drive, but it remains to be seen," Bright said.

"Sponsorship is the toughest thing at the moment; as long as there are sponsors and teams are willing to employ professional drivers then hopefully I am in with a chance.

"I have a pretty good relationship with the team. I hope I bring something to the team that is valuable set-up wise - or punting a guy if I need to!" he joked.

"Hopefully I can keep out there."

Bright and Jones' relationship has an extra layer of complication because they co-own the Racing Entitlements Contract (REC) used by the team to underpin Dale Wood's GB Galvanizing-backed entry.

Also, at 42 Bright is now the oldest full-time driver on the grid, his business-to-consumer networking service Taskforce Australia is growing rapidly and he and wife Lucy have just had their second child.

Bright's also had to wait in-line while Jones sorts out the future of the team's marquee driver Fabian Coulthard, who is also out of contract, holding out for the best deal he can get and potentially could shift teams.

Jones, who is notoriously loath to discuss his team's business dealings with drivers, said of a Bright renewal: "When I get to that I'll let you know."

But he did loosen up a little, adding:

"I thought he did a great job out there (at Sydney Motorsport Park). You look at the blokes out there and he did a good job.

"To be honest he and I have not sat down and spoken about it at all.

"I think they are all doing a good job at the moment, all our guys."

Bright celebrated 500 race starts in V8 Supercars at the Castrol EDGE Townsville 400 in July. His main game highlights include victory at Bathurst in 1998 and third in the championship in 2001 and 2004. He joined BJR in 2010.

The Albury team has gone through an engineering restructure this year, with Bright's former engineer Andrew Edwards becoming the team's chief engineer.

Coulthard's former data engineer Paul Scalzo has stepped up to replace Edwards on the #8.

Bright said he had been hoping to post a good performance at SMP when he saw rain was forecast.

It was a drive full of merit considering he twice had to double stack in pitlane behind Coulthard - first because of an early safety car and then mid-race when the rain came.

He charged forward to second on wet tyres, but then had to cede second to Coulthard late. He also survived a punt from Shane van Gisbergen late in the race that prompted him to short-cut the circuit.

It was his second punt of the weekend after Holden Racing Team's Garth Tander had him off on Saturday.

"It's been a while since I have been up here. It's good to finally get up here. I have felt our pace in the wet has been good all along, so I was sort of looking forward to today because it was wet," Bright said.

"Even last year here we had pretty good pace in the wet. It didn't end up a whole wet race but it panned out pretty good in the end.

"When you double stack twice and still finish on the podium it's not a bad day."

Bright will pair with Andrew Jones for this weekend's Wilson Security Sandown 500, and throughout the Pirtek Enduro Cup.