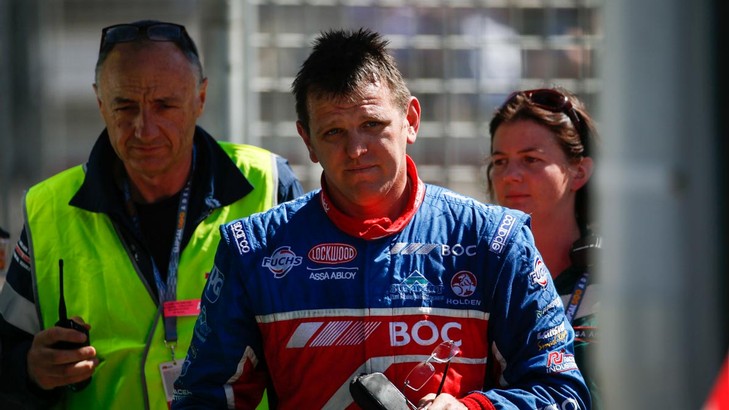 After suffering the first roll-over of his career in this afternoon’s Clipsal 500 Adelaide, Jason Bright has cautioned that the new V8 Supercars Championship re-start rules could lead to more incidents.

Bright was tripped into the spectacular double roll at the first corner in his Team BOC Holden Commodore VF after the first safety car re-start of the race.

“If they want action and they want the teams to spend a lot of money on repairing damage then they have got it in my opinion,” was Bright’s view after being give the all-clear at the Clipsal Adelaide 500 medical centre.

The new re-start rules require drivers to hold between 50 and 60km/h until the leader reaches the ‘Acceleration Zone’ where he can accelerate.

But at 50-60km/h Bright explained the cars are in first gear and can easily break into wheelspin and stack others up behind.

That happened to Jamie Whincup in third place and it meant a Tim Slade (Supercheap Auto Commodore), Garth Tander (Holden Racing Team Commodore) and Bright going three-wide into turn one.

“You end up with cars three abreast going into a chicane that can only fit one car. I got a really good start, I think I came up two rows, I ended up on the outside and you expect the guy in the middle being squeezed to back out of it and they obviously didn’t.”

Bright said even changing the re-start pace to 80km/h would help.

“It would definitely make it less potential for trouble,” he said.

“It felt like it tumbled pretty gently for a while and then it got into the tyre barrier and that’s when it got a bit rougher. After it climbed the fence it landed on its roof quite heavy.

“That was the worst bit, although I also remember the ‘old fella’ getting squashed a bit!

“But the belts and everything did their job, I felt really secure all the time.”