Bright and Tander's Bump and Grind

Bright and Tander’s Bump and Grind

Bright and Tander's Bump and Grind 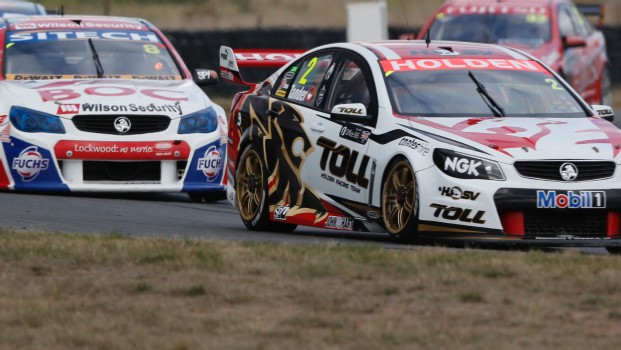 Holden Racing Team’s Garth Tander steppedin the boxing ring with Fabian Coulthard earlier in the week, but it was TeamBOC’s Jason Bright he exchanged blows with during Race Three.

The two argued over fourth position – whichBright finished in – and it made fantastic racing.

Post-race, Bright felt the fight for fourthultimately came down to how he qualified.

“We didn’t qualify as well as what the carspeed was,” he said. “I felt as though we should’ve qualified in the front rowwith the pace we had in qualifying, we just didn’t get a lap together.

“We had the race pace to race right at thefront and we were probably out of position and that’s why we were in the thickof it trying to pass people all the time. The car’s strong.”

Bright agreed it was a bit of fun gettingin the thick of it.

“It’s good racing at the moment, but Ithink Garth made it a lot harder than he was legally allowed to. He squeezed mea lot more and pushed me off the track – it shouldn’t be that hard andshouldn’t be that risky to pass someone when you’ve got pretty good speed onthem.

“So the rules say you have to leave racingroom and it would be better racing. I could’ve gotten beside him more times,but he wouldn’t allow it.

“Hopefully we qualify better tomorrow andwe don’t have to deal with him.”

Bright felt limited by the format, becauseit meant physically passing Tander, rather than heading in to the pits andusing strategy to get around. “We would’ve gone way out of sequence and got backin front. But maybe it’s a good thing (for viewers) we had to muscle past him.”

And what did Tander have to say about the exchange?

“We had a bit of a battle and he hit metwice actually, he put me in the wall in the first race (before half-time), soI whacked him back – and he doesn’t like that because he whacked meagain,” Tander said.

“I’m not sure what the case is with thatbecause normally Brighty and I race really well.

“I’m sure he would’ve said that (I didn’tgive him enough room) but I’m not sure what room I could’ve given him.

“If he was that much faster than me hewould’ve passed me more easily.”

The action begins with Qualifying for the Tasmania MicrosoftOffice 365 at 10.10am Sunday, with two races following in the afternoon.

Lowndes positive for tomorrow after incident

Garth Tander  ›
2013 Tasmania Microsoft Office 365  ›
Stay In The Know
Sign up to the Virgin Australia Supercars Championship Newsletter
We use cookies to ensure that we give you the best experience on our website. If you continue to use this site we will assume that you are happy with it.Ok