Sebastien Bourdais is not underestimating the challenge of driving a V8 Supercar at Sandown Raceway for the first time this week, after testing with Walkinshaw Racing on Thursday.

The international IndyCar star arrived in Australia just hours before jumping behind the wheel of the Preston Hire Holden Commodore VF at Winton, during the team's single independent test day of the season.

While Bourdais, 36, has driven a V8 Supercar as an international co-driver from 2010-12, it has been some time since his win with Jamie Whincup on the Gold Coast.

This year, the Frenchman attacks the full Pirtek Enduro Cup (including a return to the Gold Coast) with Lee Holdsworth in a Walkinshaw new gen Commodore.

"I am looking forward to getting there and doing the best we can to achieve the best result possible for the team," Bourdais said.

"It's not going to be easy, and I knew that coming here. The cars are tough to drive, so for a guy that isn't a regular in the car and coming from a very different background, it takes a bit to get used to but I look forward to the challenge. I always have a good time trying to adapt and extracting the best out of whatever car I get in to."

While he admits he didn't "set things on fire" at the test day, Bourdais believes he learned about the car's traits and grew more comfortable in the driver's seat.

"The biggest thing for me is making sure I don't overdrive the car," he said.

"Compared to an open-wheeler or a prototype, there isn't much aero on these cars, the tyres are small and the car weighs a lot.Everything happens a little slower and you need to make sure you don't overdo it and step over the limits and make mistakes.

"It's all about getting in sequence with the car; the timing of the braking, how much speed you can carry and how quickly you can get back on the power." 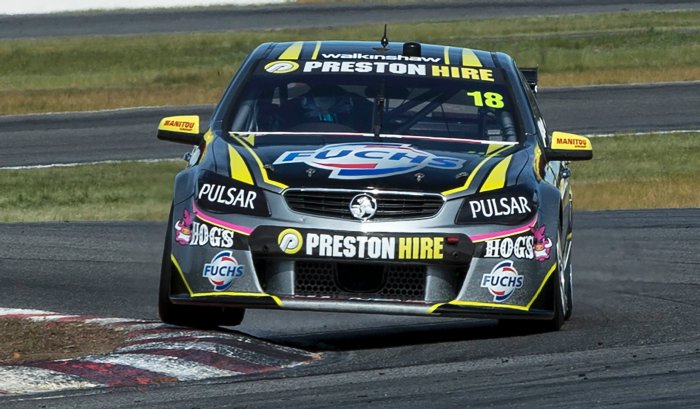 Walkinshaw Racing Managing Director Adrian Burgess was instrumental in securing Bourdais as a co-driver for the Charlie Schwerkolt car, after working with Bourdais as an 'international' co-driver.

Burgess was pleased with the Frenchman's progress last week and has no doubts he will be up there with the rest of the co-drivers at Sandown and across the Pirtek Enduro Cup.

"He's exactly the same driver and person as I remember before," Burgess told v8supercars.com.au.

"He hopped into the car easily [and on his] second run, he was doing times that would easily put him at the front of the Dunlop Series field, and at the end of the day he was lapping similar times to the other drivers.

"It's hard to compare tyres car to car, but I think Lee and Alex [Somerset, engineer] on that car were very happy with the driver choices we made.

"Seb [completed] 60 laps, and he's done exactly as I knew he would.

"He's a class act, he'll do a great job for Lee and the team over the next three events."

Bourdais has spent the week preparing for the Wilson Security Sandown 500, reviewing footage and data ahead of Sunday's race.

Co-drivers will exclusively run in two of the three 30-minute practice sessions on Friday at Sandown, before a final all-in practice Saturday morning and then the unique qualifying format that sees all the co-drivers face off in a 60km race, before the main drivers take over to lock in Sunday's starting grid.

"I have been looking at the data and in-car footage, so I've got a pretty good idea of what the track is like visually," Bourdais said of Sandown.

"The good thing about [testing at] Winton is that the track grip is not very high and I don't think it will be very high at Sandown, so it shouldn't be a shock.

"I also think Sandown will be a little more suitable for the car balance we have, with a lot of 90-degree corners where you brake, turn, point and get out of the corner."

Bourdais will get a good look at the track tomorrow, when the team completes its track walk at Sandown Raceway, ahead of Friday's practice action.