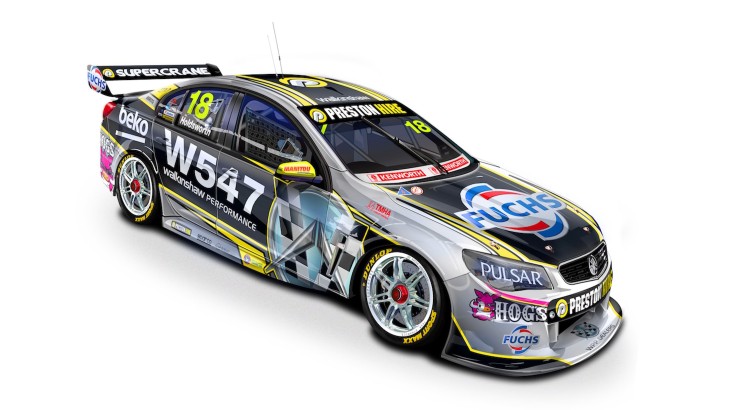 Lee Holdsworth's Holden Commodore heads to the ITM 500 Auckland this weekend sporting a new look, as Walkinshaw Performance Products joins the team as primary sponsor for the remainder of the 2015 V8 Supercars Championship.

With the recent announcement of Walkinshaw's latest W Series Package, the W547, WPP will launch its most power performance product via its partnership on the #18 Holden.

Celebrating the special launch edition of the W547, which includes a unique version of the WP230 Supercharger in gloss yellow, the #18 will retain its striking yellow features that adorned the car during its Endurance Cup campaign.

Team Owner Charlie Schwerkolt said: "We are very excited to showcase W547 on the sides of our #18 V8 Supercar for the last three rounds of the Championship, beginning in New Zealand.

"The Walkinshaw name is famous both on and off the track; and their team have used their background in motorsport to deliver the highest level of aftermarket modifications.

"This is the newest and most powerful Walkinshaw Performance package ever made, and the lucky customers who purchase one of these upgrades will have more power at their hands that what is experienced in our race cars."

Walkinshaw Performance Products General Manager Tony Harris said: "With the launch of VFII it makes sense for WPP to release one of its most exciting W Series packages yet.

"With close to 2000 W Series packages fitted to customer vehicles over the past two years, WPP continues to lead the way in power, performance and passion.

"More importantly, we have new customers experiencing what the brand has to offer for the first time and you simply can't wipe the smile from their faces."

When fitted to any LS3 6.2-litre V8 powered Holden or HSV, the upgrade package delivers an unbelievable 547-kilowatts of power and 880-newton metres of torque.

"It's not necessarily about the power and torque, it's really about how well the package is put together and how well it drives which in turn is based on how well it's engineered," Harris continued.

"All up there are currently 6 W Series packages on offer with something to suit just about everyone."

The ITM 500 Auckland kicks off onFriday with practice at Pukekohe Park Raceway.