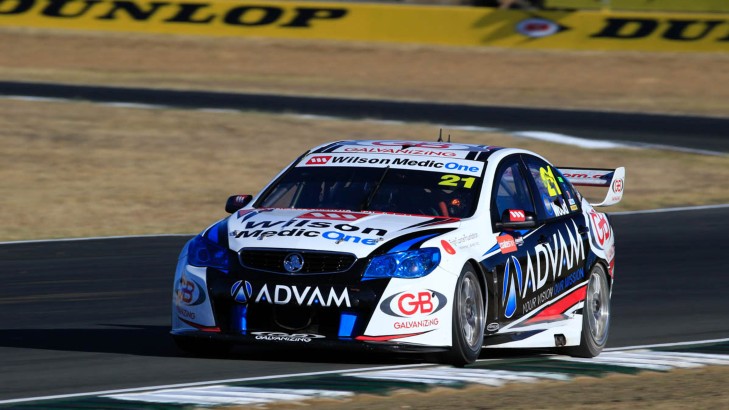 V8 Supercars regular Tim Blanchard has been linked to the co-driver's seat in Dale Wood's Advam/GB Galvanising Holden Commodore VF, after it was confirmed he tested the BJR and the Lucas Dumbrell Motorsport Commodores twoweeks ago.

Blanchard, who missed out on a full-time V8 Supercars drive in 2014 after spending 2013 with Dick Johnson Racing, is thought most likely to line up with Russell Ingall in the Repair Management Australia Commodore in the PIRTEK Enduro Cup.

Brad Jones Racing is due to announce Wood's co-driver next week. Kiwi Chris Pither, who races for BJR in the Dunlop development series, has co-driven the #21 car for the last two years and is hopeful of being signed up again.

That would leave only LDM and wildcard Dragon Motor Racing as to confirm its full driver lineups for the three-race endurance season, which kicks off at the Wilson Security Sandown 500, September 12-14.

LDM is understood to have harboured hopes of signing up an international to co-drive with Ingall, but the longer that situation remains unresolved the shorter the odds of Blanchard joining the team.

"We're looking at a few options," the 27-year old told v8supercars.com.au of his possible enduro seats. I had about ten laps in Russell's car. It was good to get a feel for the cars... they are not that different in their characteristics."

Blanchard returned to the Dunlop Series this weekend at the Coates Hire Ipswich 400, to re-familiarise himself with a V8 Supercar, in the case of a call up for the PIRTEK Enduro Cup.

"I'm pretty happy to be back in a V8 Supercar - it has been eight months," he said.

"I'm not in the Championship, so there's not too much that I'm fighting for. I'm just trying to get some laps and some experience and have a good day.

"I'm just trying to get some miles under my belt and keep race fit, that's the main priority at this stage. Whether something eventuates with the enduros, I'll hopefully know soon but the main priority is to try and keep some sort of race fitness."

At this stage, Blanchard's return to the series was restricted to his appearance at the Coates Hire Ipswich 400, finishing inside the top ten in the second race after being sent off the track by team-mate Andre Heimgartner in race one.

As the Dunlop Series narrows in on the upcoming mini-enduro at Bathurst, Blanchard did not discount an appearance in the 250km haul for the category around Mount Panorama.

"It sounds pretty exciting, I'd like to have a good at it," he said. "We'll just have to wait and see what happens in the next few months."