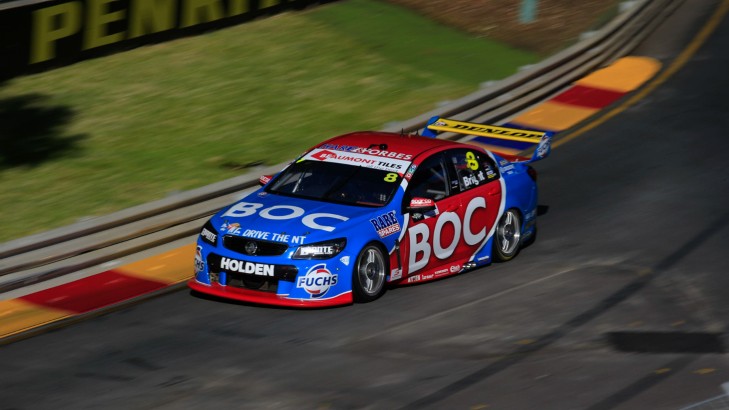 Jason Bright is confident Brad Jones Racing can get its 2015 campaign back on track in this weekend's UBET Perth SuperSprint, at the track where he claimed the team's first V8 Supercars championship race win back in 2011.

But he has also emphasised a technical restructure of the team and rethink of the way the three team drivers work together at events will take time to show its true worth.

BJR's 2015 season started strongly at the Clipsal 500 where Freightliner Racing's Fabian Coulthard won a race and Bright was in the top 10 in his Team BOC Holden Commodore VF.

But at the Tyrepower Tasmania Supersprint the three-car squad, which also includes the GB Galvanising Commodore of Dale Wood, managed only one top 10 result, when Coulthard finished ninth in the 200km Race 6.

Headed into this weekend's event at Barbagallo Raceway, Coulthard runs seventh in the drivers' championship, Bright is 11th and Wood 15th.

"I am confident we have all the ingredients to be strong here in Perth," Bright told v8supercars.com.au.

"It's just a matter of having a car that somewhere near the mark when we roll it out of the truck and making all the right decisions in practice.

"Then you have to try and nail a lap in each qualifying session with limited runs on green tyres.

Bright has an excellent record at Barbagallo, having won there as far back as 2002 when he was at the Holden Racing Team. His 2011 win coincided with then teammate's Karl Reindler's fortunate escape from a spectacular and fiery explosion when his car was rammed from behind on the grid.

"I have had a very good run at Barbagallo going back to HRT and TWR days," said Bright. "It is a different circuit, it is very low grip compared to most other circuits and I don't know what it is about it, but it has worked pretty well for me no matter which team I have been with."

BJR has gone through technical department restructure and changed how it approaches each event as it seeks to recapture the consistent front-running pace it achieved in 2013 when the New Generation V8 Supercar was first introduced.

Andrew Edwards has moved from his position as Bright's engineer to an over-arching role as chief engineer of the team, while in concert with that the three cars are working closer on set-up development at each meeting in 2015.

"There have definitely been some benefits but whether they result in an immediate result on the track is another thing," Bright said. "I think over time the structure will pay off for the team for sure.

"I feel we have dropped some positions but it's not far to get back to the top five. It's all very close at the moment.

"As a team we have made some changes and the amount of time gain we are looking for is very small and if we all work together - which we haven't done the best job of previously - we will benefit."

Bright explained the new development process required the three cars to arrive at the track with the same set-up.

"We have all made a bit of a compromise on set-up to start off with the same set-up at each race meeting," he explained. "Immediately I think that's not ideal for anyone in the team, but if we are working on that same set-up and all going in the same direction and can make changes and compare notes a lot better, then over time it will pay off.

"But whether it gets results immediately then that's a challenge."

BJR's 2014 performance was hindered by a horsepower deficit that was overcome by the Supercheap Auto Bathurst 1000. The team also took much of the season to fully understand the latest generation Triple Eight Race Engineering front-end.

Braking and confidence in the brakes were Bright's issue in Tasmania, which he says has been overcome for Perth. However, he said the team's cars were not significantly different from when they finished the Symmons Plains races five weeks ago.

"We have actually gone back on a couple of things we ran in Tasmania and at the grand prix," he revealed. "But after three race meetings in one month everything needs a bit of a look at and just to make sure everything is right again. But we are not going there with any major differences."