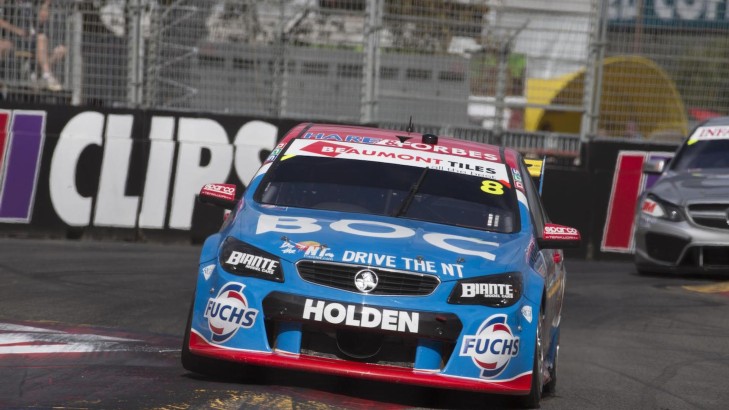 Travel NT continues on as a support sponsor for Brad Jones Racing in 2015, with the 'Drive the NT' slogan highlighted across the front and centre of the Team BOC and Freightliner Racing VF Commodores for the V8 Supercars season.

Team owners Kim and Brad Jones arethrilled to have the Northern Territory back on-board, before the Darwin round of the Championship, which is always well-received in June.

"It is fantastic to be involved with the NT again," Kim said.

"It is such a great place to visit and it is a privilege to represent them at Brad Jones Racing. Having the continued support of the whole Travel NT team and Chief Minister Adam Giles is just brilliant."

"Anyone who has visited the NT knows that it is an iconic place. Any chance for us to visit; whether it be race season or not is one we wouldn't miss. They love their V8 Supercars and have been behind us for a couple of years now."

BJR's Jason Bright features in road safety campaigns shown in the Northern Territory, shining light on the importance of being safe on the roads - getting to and from a destination safely is as important as the holiday itself.

Bright was lucky enough to have a real taste of how great a holiday in the Norther Territory can be, treated to some of the destination's best offerings last year with Craig Lowndes.

"The Territory Government is thrilled to be working with the Brad Jones Racing Team to encourage motorsports fans to come and 'Drive the NT'," Chief Minister Adam Giles said.

Brad Jones emphasised just how popular the Darwin event, staged from June 19-21 this year, was for both the fans and those in pit lane.

"It is a great experience to get up to the NT. You are really spoilt for choice with the huge range of things you can see and do when you visit," he said.

"It also holds one of the best V8 Supercar events for both the teams and the fans. We always race in front of great crowds, so many people turn out to see us each year. Once you visit the NT, you want to go there again and again."

The NT has beeninvolved with BJR for a couple of years, also having advertised on the Commodores in 2013.