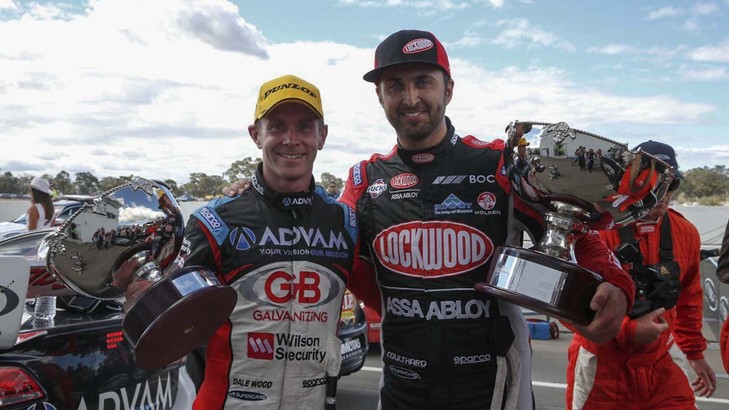 Valvoline Racing GRM is racing the clock, replacing the engine in Scott McLaughlin’s Volvo ahead of this afternoon’s front row start, after a drama early that saw the S60 spewing smoke. McLaughlin triggered the first Pedders Chrysler Safety Car, with Ingall taking the opportunity to pit for fresh tyres, while the rest powered on.

And they powered on – chaos unfolded with contact between a number of cars, with Walkinshaw stablemates James Courtney and Tim Slade involved in incidents and failing to finish the race.

Todd Kelly’s stationary Jack Daniel’s Nissan stranded between turns three and four almost immediately triggered another safety car. And while Mark Winterbottom and Jamie Whincup had to drive through the field to make up for ordinary qualifying results, it was 24th starter Ingall and his new rubber everyone was watching.

Carving through the field on the freshest tyres, The Enforcer pushed a little two hard, turning David Wall around and earning himself a late drive-through penalty.

Lowndes dropped back as his tyres faded away, and it was BJR who capitalised with Wood, and Bright edging closer to the podium.

Behind Bright in fourth it was Lee Holdsworth and Will Davison's Erebus Mercedes’, Mark Winterbottom – who started 23rd – Lowndes, Whincup and Ingall (after rejoining).

Others to note include Garth Tander 15 and first Nissan Kelly in 17.

Race Eight kicks off at 4.25pm local time, with Coulthard once again starting from ARMOR ALL Pole Position.

Fabian Coulthard  ›
15' GB Galvanizing Racing ›
15' Team BOC and Freightliner Racing ›
2014 Winton 400  ›
Stay In The Know
Sign up to the Virgin Australia Supercars Championship Newsletter
This website uses cookies to improve your user experience. By continuing, you will be providing your consent to our use of cookies.Ok