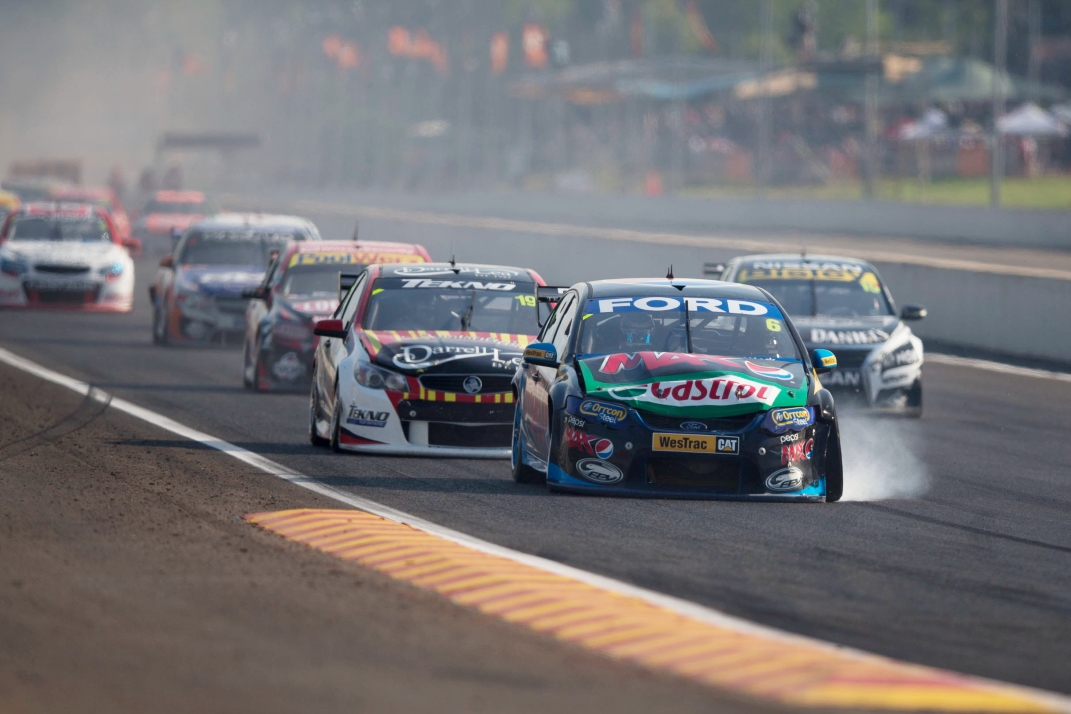 Notable for its kilometre-long pit straight, Hidden Valley Raceway’s first corner has been the site of many a flashpoint.

The venue of next weekend’s Merlin Darwin Triple Crown, the Hidden Valley circuit is punctuated by its straight, where cars reach over 270km/h.

Drivers require massive commitment under brakes into the corner, which provides a key overtaking opportunity.

Therein lies the great risk of Turn 1 in Darwin; get it right, and it sets up the overtake and the lap.

Get it wrong, and you either destroy a tyre set, or not only your race, but several others’.

That was the case from the get go in 1998; Jason Bright started from pole for the very first race, but was swamped off the line.

Starting fourth, Jason Bargwanna loomed to sweep into the lead, only to be turned in front of the field by Bright.

Bargwanna speared right, tagging John Bowe into a spin, with Larry Perkins turned into the infield.

The 2004 event began with Marcos Ambrose and Mark Skaife clashing at the final corner in Race 1, handing victory to Russell Ingall on a platter.

Come Sunday, and the two Stone Brothers Racing Falcons cannonballed into Turn 1 off the start, Ambrose tipping Ingall into a spin.

Perhaps the most dramatic Turn 1 moment in Darwin’s history came in the dying stages of the Saturday race in 2011.

Mark Winterbottom led from pole, and firmed for victory before the Safety Car was called late on due to Tim Slade’s stricken car.

An eager Jamie Whincup caught Winterbottom napping and gained an overlap on the restart, with Shane van Gisbergen and Lee Holdsworth making it four wide.

The melee saw Rick Kelly fire through into a lead he wouldn’t surrender, having started 12th.

Holdsworth finished fourth, van Gisbergen seventh and Whincup ninth, with Winterbottom coming off worst in 15th, having spun to the rear.

Winterbottom’s 2015 visit had a much better start, with the eventual series champion finishing second behind Prodrive teammate Chaz Mostert.

The race itself didn’t go to plan for the Holden Racing Team, with pole man James Courtney clashing with teammate Garth Tander and van Gisbergen at Turn 1.

It came after a late Safety Car was called due to grass fires in the infield; the race itself began with a Turn 1 clash between Whincup and Fabian Coulthard.

The run to Turn 1, coupled with a long pit exit, also makes for dicey rejoins in both races and qualifying.

Notably, in 2017, Garth Tander nearly tripped over Alex Rullo in qualifying as the latter exited the pits and onto the racing line.

The long run to Turn 1 also tripped up two key names in 2020, which featured two trips to Darwin.

Scott McLaughlin’s run to victory in Race 14 was aided by an error for teammate Fabian Coulthard.

McLaughlin exited the lane and in front of Coulthard, who bowled a wide at Turn 1 and handed second to Whincup on a platter.

The second of the double-header saw Whincup clash with an ambitious Cameron Waters.

Steaming down the straight, Waters opted for the switchback on Whincup, who was exiting the lane.

Waters climbed on the inside kerb, careened into Whincup and took himself out of the race after sustaining front-right damage.

Next weekend’s event will feature three races as drivers aim to join McLaughlin and Whincup as the only winners of the Triple Crown.