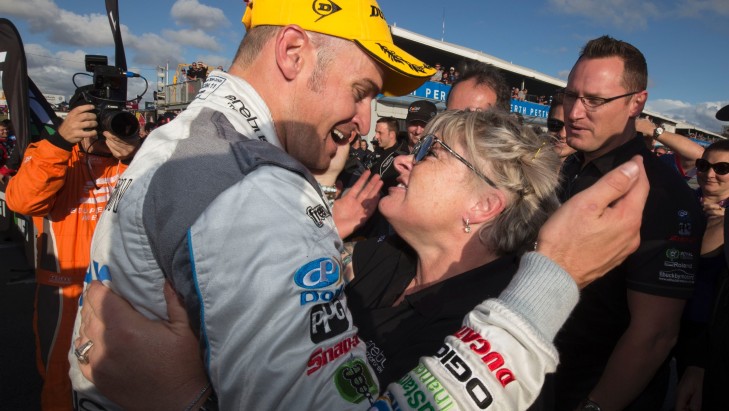 Driver Will Davison and the team were emotional after the thrilling victory, with the Erebus Mercedes E63 AMG pinching the lead from Craig Lowndes in the dying stages of the 200km race.

The win was the team's second in the Erebus guise - after Lee Holdsworth broke through at Winton last year - but after a near miss last time out in Tasmania, Klimenko says the team should not be written off.

"It's the start for me," Klimenko told v8supercars.com.au.

Lowndes seemed in the box seat for yesterday's win, after starting sixth on the grid. But Davison, who started seventh, caught and overtook the Red Bull Commodore with four laps to go and immediately began to build his 5.6sec lead as Lowndes lost his soft tyres.

"It was exciting," Klimenko said of the finish.

"When he got into the top 10, I was like 'ok, this is cool, I'll accept this'... But when we went from second to first I was actually quite calm.

"It was the last four laps where I'm going 'tyres please don't waste away', but if there's anyone in this field that is going to keep tyres up, it's Will."

The team headed to Perth with engine upgrades in Davison and teammate Ash Walsh's cars, and believed the latest version of the M159 engine would provide improved drivability and straight-line speed, that would help at the Barbagallo circuit.

"The engine guys and the crew working tirelessly to get our engine where we predicted we'd get it. When we didn't come in the first year with a bang, we needed to learn," Klimenko said.

"We put in so much hard work and the boys deserve it. Hopefully it's the start of things to come."

Team manager Ryan Maddison confirmed there were improvements to both the engine and the chassis of the E63s.

"The main focus for the engine - as everyone keeps asking about - is drivability, but with drivability you obviously have a little bit more finesse across the entire requirements of the engine," Maddison said.

"The drivability is effectively how it applies torque not just raw power. We were able to find gains in all of those areas."

While the format and tyre allocation is different to last year, now facing the track that hosted the team's first victory, Erebus is confident about continuing its form at the next round, which is less than a fortnight away.

"We were strong last year at Winton with that first win, but as you know and what every engineer up and down pit lane will say, you're at the mercy of the elements and making sure you get it right on the day," Maddison said.

"Hopefully we can still carry some of our speed into the next round and keeping consistency will be the key.

"It will be interesting when we get to Darwin - that will probably be were it starts to show up for us to show whether we have the consistency.

"But all in all I think between Tasmania and here, going into Winton we can be really confident."

The weekend's results in Perth - three top 10 finishes and a win on the double points day - elevated Davison from 21st to 12th in the Championship. Lowndes' second place has put him in the lead with a 52 point advantage over James Courtney.

Dutton: Winterbottom's the one to watch