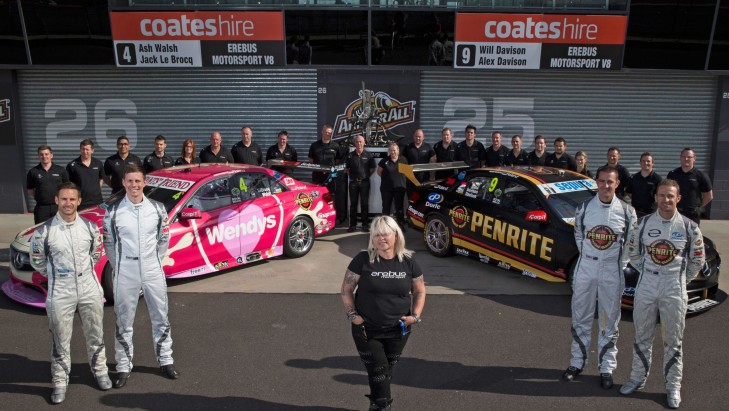 Betty Klimenko can't wait to stand out on the grid with her Erebus Motorsport Mercedes Benzes today when she celebrates 101 V8 Supercars Championship races as a team owner.

Coming into the sport in the car of the future era in 2013, Klimenko has had a wild ride in V8 Supercars but believes ticking off 100 races yesterdayproves she is in it for the long haul.

There has been much scrutiny on the team since transforming from Championship contending Stone Brothers Racing for '13 and while Klimenko has had to make some tough decisions along the way, she has already celebrated two race wins and a Pole Position.

Speculation has surrounded the group again this year with staff overhauls, a tough sponsorship market and departure of star driver Will Davison. But Klimenko reminds her fans the team is still new and crossing off 100 starts is something many said she wouldn't do.

"Statistically I probably should not have got those, because my engine is only two and a half years old and not fully developed ... it has taken other established teams years to find the right way and the right recipe. I probably will go through more changes because you can't make anything perfect in a short time. It takes years to work out exactly what we need to be."

Other teams that have made the switch have earned wins, with Volvo winning in its first year - but Klimenko's story is different.

"I think it was 10 times harder for me to come into this series than anyone else, in the sense that I was a brand new person in the series.

"It's not like any other series in the world, it's such a unique experience and series you have to learn as you go and hopefully you take advice from the right people."

Yesterday's race saw brothers Will and Alex Davison challenge the front-runners, though they were caught in chaos and ultimately given a drive through penalty at the end of the race.

But today is the one that counts for Klimenko, representing the next phase of Erebus Motorsport.

"You're starting off again - this one is the new start to the next rollover ... hopefully I'll be celebrating my thousandth in 20 years or whatever it is.

"I look at [completing] the 100 as a milestone and I'm really happy but not emotional about it.

"I'm glad we're here, happy we made it this far, now let's do this five times over."