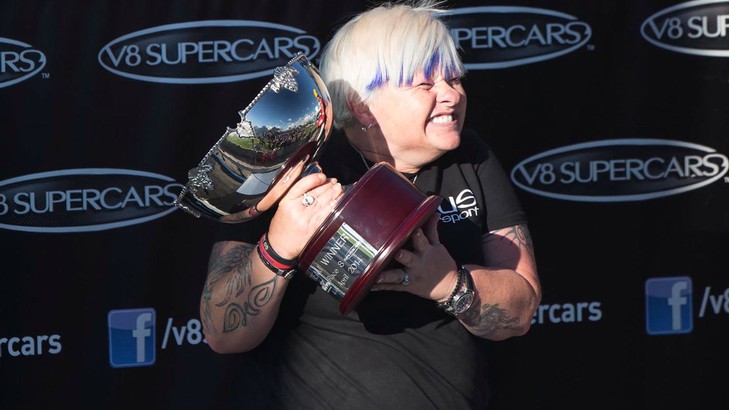 From barbecued engines to finishing first – Erebus Motorsport V8 team owner Betty Klimenko could not be happier with her team’s first V8 Supercars win yesterday after joining the category in 2013.

Swarmed by fans post-race, no matter the shirt they were proud to be there on the day Lee Holdsworth scored the first for the Mercedes-Benz AMG team, the third win of his V8 Supercars career.

It has been a long road for the team making the manufacturer switch and after a development year last season, with a litter of top 10 results, they’ve not just made their way to the podium, but to the top step.

“We had a barbecue in the engine on our first day and this is just so super sweet for me,” Klimenko – the first female team owner to win a V8 Supercars race – told v8supercars.com.au.

And she couldn’t think of a better place to do it than rural Winton Motor Raceway.

“We are in a place where true fans come to watch – for me this is worth a hundred Homebushes or Townsvilles because I’m standing in the middle of true fans who have come out here."

Photos, autographs and hugs were in order for all admirers – a lucky few even got to hold the winner’s cup.

And it wasn’t just fans swarming – Volvo's Garry Rogers was one of the first over to congratulate his fellow team owner on the effort, “Well done mate, first class”.

How did she attract so many? Fans seem to gravitate to the larger-than-life Klimenko.

“That’s what Erebus is,” she said simply. “We’re a team that is sprung out of people. We’re not a factory team, we’re not even a Mercedes team, we’re an Erebus team… We’ve worked hard. We didn’t come in, in a blaze of glory, we came in and had to push the car backwards."

Klimenko was so emotional in the final stages of the race, as Holdsworth’s battle raged with Lockwood Racing’s Fabian Coulthard, she could barely speak and teared up as he crossed the line.

“I just remembered every face I’ve seen, every hand I’ve shook, every autograph I’ve given and it’s just flashed before my eyes, I thought, 'oh my God I must be having a heart attack!'.

“But it’s not just for me. It’s for the boys, for the drivers, the people.”

She singled out Holdsworth and his patience through what was a tough foundation year last season.

“What that boy’s gone through – and he’s just picked it up and gone who gives a crapola about last year, I’m going to go forward and do this. He is an amazing driver.

"And I’ve got to give it to Will (Davison). Will has given him confidence this year – he has gone in there and grabbed him and said, 'come on Lee, you can do it'.

“There’s no rivalry between these two even on the track, I could not have asked for a better pair of drivers or a better crew. It’s just all perfect. We worked bloody hard for it. And it’s one of those things that if you work hard this is what you get. And I wouldn’t want it any other way.”

Her feelings about the 200km race – can Erebus do it again today?

“I never predict because I’m a true believer and pride comes before form. So we will be where we deserve to be,” she said.

And then it was more photos, hugs and fan time.

Team boss Ryan Maddison was equally ecstatic, and agreed that fans of all marques and the V8 Supercars community was proud of what they had achieved.

“I don’t really have other words, other than I am so proud of what these guys have achieved,” Maddison told v8supercars.com.au.

“It is just reward for their belief… The experience and brains up and down pitlane – it’s a tough nut to crack.”

Holdsworth and engineer Brad Wischusen were “measured” in their approach to the race, applying pressure where required.

“With 10 laps to go, we basically said ‘the leash is off, go get him’ and for two laps they sort of had a dance, but it was obvious Lee had pace, he just had to find somewhere to get round. Fortunately typically Lee, he did it in such a clean way but very strong. He went round and it was nice to see him pull a gap without too much problem at all … I was really proud of how mature Lee was about the pass.”