Zak Best was left in shock when his Repco Bathurst 1000 campaign ended just seconds after the start.

Best, driving with Thomas Randle, was wiped out in the Mountain Straight incident on lap 1.

Jack Perkins and Jamie Whincup spun in front of the field.

Most cars go through down the middle, but Best was forced to the left of the spinning Perkins.

However, the #55 Castrol Ford slid on the wet grass, and Best was a passenger.

The car hit the wall and Best was out on the spot, with several cars also picking up damage.

With the damaged car stuck in the wet grass, Best and Randle’s day was over.

“Obviously I’m gutted, to have the race over so quickly was just a shock,” Best said.

"We knew it was wet in Turn 1 and up Mountain Straight, so I tried to take it relatively easy on the start.

"Then ahead of me a few cars came together and all of a sudden there were two cars spinning in front of me.

"I tried to slow down but it got to the point I either had to take the grass or hit one of them.

“When I went for the grass I lost my steering in the mud and hit the wall.

"It’s a huge disappointment to be out so early, unfortunately there was nothing else I could do.”

It was a shattering result for Randle, who is currently in his first full-time season.

Randle loomed to book a Shootout berth before he ran off at The Chase late in qualifying.

Tickford had all four cars in the wars, with the Zane Goddard/James Courtney car out on lap 5.

Moffat and Cam Waters recovered to the podium, with the likes of Randle, Best, Courtney and Goddard staying trackside to support them.

“It was incredibly disappointing to see Zak caught up in that first lap melee,” Randle said.

"He really had nowhere to go and the grass was so wet, as soon as he got on there he was gone.

"It was such a helpless feeling watching it all unfold, but I guess that’s Bathurst, some days just aren’t meant to be.”

Winterbottom in disbelief over early damage 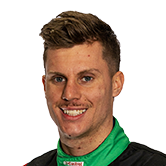