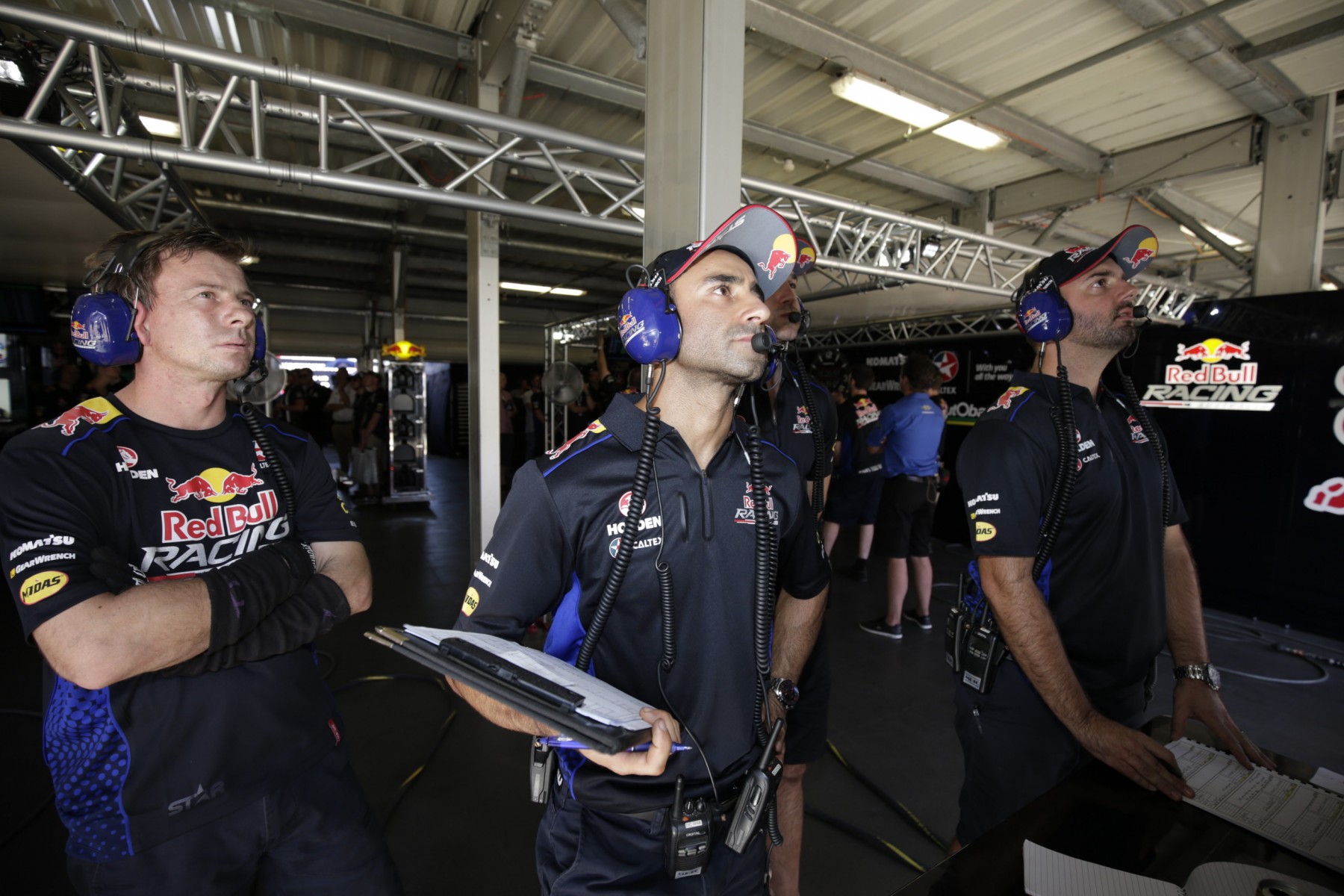 This year will be a battle of the brains at Triple Eight Race Engineering with much of the winning to be done behind the scenes.

That’s the call from six-time champ Jamie Whincup after his first place finish in yesterday’s race at the Formula 1 Rolex Australian Grand Prix, when he led home another T8 trifecta.

For the second time at Albert Park the three teammates filled the podium, with Shane van Gisbergen and Craig Lowndes fighting hard for second place.

Winning by over six seconds, Whincup said the contest between the teammates could come down to the engineering calls made given the three Holden Commodores were so equally matched.

“The car was certainly much better [in race three],” Whincup said after the race.

“I think it just highlights that we’re all in identical machinery – but it all just comes down to how you tune it with your engineers behind the scenes.

“That’s what the game is all about. My car was ordinary yesterday, and was much better today.”

Increasing focus has been on the engineers and crews in V8 Supercars, with the team members to ensure the car performs at its optimum every time it leaves the garage.

“There are people you don’t see back in the garages – well, in the trucks mainly.

“They’re confined to the B-trailer of the truck going hard as they can and that’s the difference – they’re trying to give us the best tool we can use.”

Whincup’s relationship with engineer David Cauchi has been scrutinised since Cauchi took the position vacated by current team manager Mark Dutton in 2014, though the pair ultimately won the title together that year.

Dutton took engineering duties back on-board during Whincup’s mid-season slump last year. Cauchi and Whincup were reunited for the New Zealand event at the end of 2015 and performed well in the final three events.

Grant McPherson remains in the Red Bull garage to engineer van Gisbergen this season, after helping Lowndes to second in the championship last year.

With the team’s expansion, Ludo Lacroix takes on engineering duties for Lowndes, both working together as a pair for the first time. 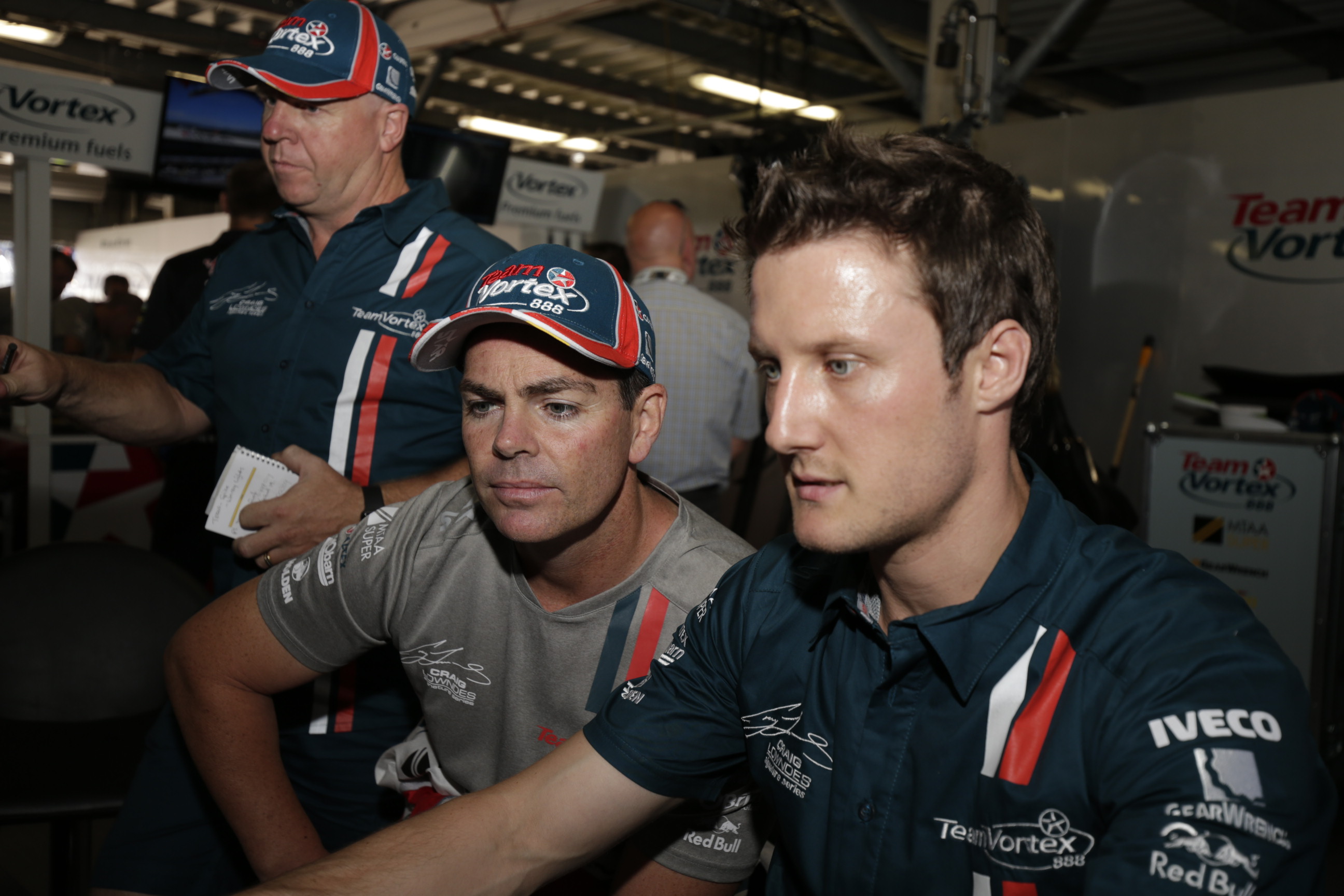 In yesterday’s race, Lowndes pressured the #97 Red Bull car for second position in and was pleased with the progress the TeamVortex group had made since the season opening Clipsal 500 Adelaide.

“We’ve come leaps and bounds since Clipsal, Ludo and I are working very well together, the car is responding and I’m feeling a lot more comfortable in it,” he said.

“We have our strengths and weaknesses. Our car was very good under brakes and into corners, but couldn’t quite get the drive out alongside him.”

Two-race winner van Gisbergen admitted the changes to his car were a step backward, though he still hung on to second place and leads the event points for the Coates Hire V8 Supercars Challenge at Albert Park.

“We made a few changes to our car, and it was pretty obvious it wasn’t as good as yesterday. We really struggled,” he said.

“With the weather at the start, I wasn’t that confident with the car, I was still trying to get a feel of it. Jamie got pulled a nice pass at one and I was just having a run with him until it dried up and then my car went off.

“Again top three is awesome for the team. To not be happy with the car, and still run second is awesome.”

Van Gisbergen will start from P1 in tomorrow’s final race at Albert Park with Whincup alongside him and Lowndes on the second row with DJR Team Penske’s Fabian Coulthard.

The finishing positions were determined by combined points earned over the three races run at the event.