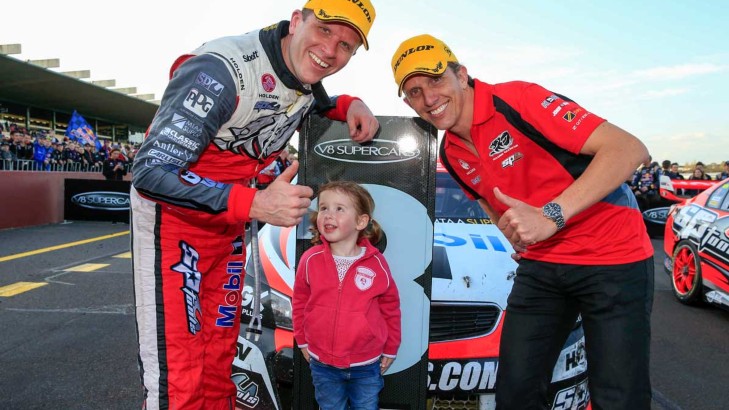 Warren Luff says his ousting from the Red Bull Racing co-driving seat alongside Craig Lowndes has not prompted any change in his mental focus or preparation for this year's Pirtek Enduro Cup.

Nor, he insists, is he racing with a point to prove to anyone but himself.

The 38-year old from Sydney was replaced in #888 by former Ford Performance Racing regular Steven Richards for the long distance season, despite claiming the inaugural Pirtek Enduro Cup with Lowndes last year.

Luff's ouster came into sharp focus in the Wilson Security Sandown 500 because he managed to finish third with the Holden Racing Team's Garth Tander, who just held out a charging Lowndes at race's end.

But Luff said beating the Lowndes/Richards combination and denying them the rostrum did not hand him extra satisfaction.

"It's exciting to finish on the podium and obviously nail biting there in the final stages with Garth and Craig, but for me if you want to win races then you've got to beat everyone out there. So it's not any more special to beat Triple Eight," he told v8supercars.com.au.

"I had a great two years there and have found a great home here at HRT and it was a nail biting finish. It's an exciting time here, but still a bit of work to do if we want to get on to the top step of the podium."

Earlier at the Sandown post-race press conference Luff was asked if it felt good beating his old team. While he answered in the most evasive way possible, Tander urged a different tack that perhaps revealed there is some feeling about the issue.

"Just say yes," he told Luff. "That's why he wasn't getting past, it was for you Wazza. Just say yes!"

Instead, Luff, clearly anxious not to create headlines offered: "Any time you are on the podium you are happy, but obviously there is another one ahead of us, there are a few more places to get up in a few weeks time."

Separately, Luff told v8supercars.com.au that his replacement at Triple Eight had not prompted any raised level of self-examination.

"No more than any other year," he insisted. "At the end of the day I go racing because I love driving cars and I want to win races, but my preparation this year, my mental focus and how I approach it hasn't changed from previous years.

"It's not like I am going out there with a point to prove."

"For me the only point I ever have to prove is to myself and to finish on the podium I am very happy with that. So roll on Bathurst."

There's no doubt Luff has been in good form in 2014. He leads the Australian Carrera Cup from Richards by six points in his McElrea Racing Porsche 911 GT3 with two rounds to go and has also had solid forays in GT racing here and overseas.

At Sandown, as per many co-drivers, he drove more than half the race, fighting back from getting boxed in at the start and double stacking to hand the car over to Tander in eighth place. His times were consistently in the 1 min 10-11 sec bracket, and his fastest time only 0.04 slower than Richards.

"Any time you spend in race car has got to help and at Sandown I did 80 something laps and I got out the car feeling fresh and fine, and it wasn't a problem," said Luff.

"Doing Carrera Cup is a help because it keeps you race sharp, as does the GT stuff I have done overseas and the GT racing I have done here. The more miles you do in a race car the sharper it is going to keep you."

The V8 Supercars line up at the Supercheap Auto Bathurst 1000 next month.

Warren Luff  ›
15' Holden Racing Team ›
2014 Supercheap Auto Bathurst 1000  ›
Stay In The Know
Sign up to the Virgin Australia Supercars Championship Newsletter
We use cookies to ensure that we give you the best experience on our website. If you continue to use this site we will assume that you are happy with it.Ok