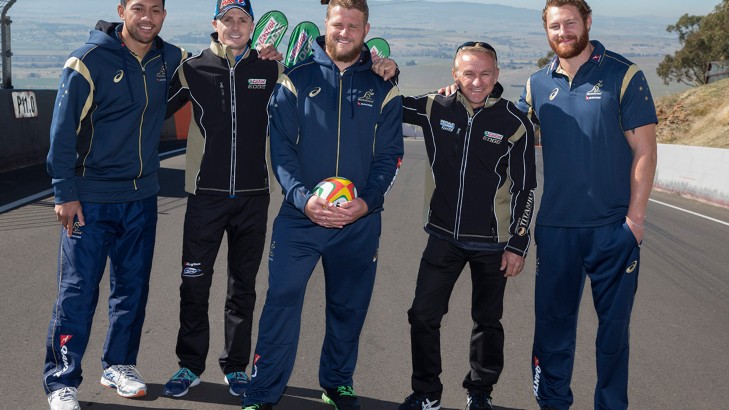 Bathurst winners Mark Winterbottom and Russell "The Enforcer" Ingall have given the Australian Wallabies an insight into one of world sport's toughest sporting challenges - the Supercheap Auto Bathurst 1000 at the intimidating Mount Panorama.

Winterbottom and Ingall joined the Wallabies at the world famous Mount Panorama as part of the launch of the third Castrol EDGE Rugby Championship against New Zealand, South Africa and Argentina.

Mount Panorama symbolises the most demanding challenge of strength on both man and machine and was seen as the perfect fit to launch the Castrol EDGE Rugby Championship.

Last year's Supercheap Auto Bathurst 1000 winner Winterbottom was delighted to showcase his sport and the mountain to the Qantas Wallabies and talk about strength and performance with some of the country's most elite athletes.

"We train extremely hard to race in an event like the Bathurst 1000 so today was a great opportunity to show our national rugby side how we prepare for a demanding track like Mount Panorama," he said.

"Some of the guys were pretty surprised at the amount of preparation that we put in, but after taking them for a tour of the circuit in the Castrol EDGE bus they were blown away by the extremes that we face.

"While we may not have to take physical impacts time and again or engage in a scrum with 900kg coming in from each side, we certainly do face extremes that put pressure on our bodies and our V8 Supercars.

"We face extremes of G-force, heat exposure and intense braking pressures and, at such high speeds, one lapse in concentration can end your race.

"It's great that we had this opportunity to share our sport with the Wallabies and hopefully we can both claim Championship victories in 2014."

Castrol Australia Marketing Director Diana Hall was excited by the chance to bring together two integral parts of the Castrol family, rugby and racing, to launch what is set to be another exciting season.

"We're extremely proud to once again be partnering with the Australian Rugby Union (ARU) as official performance partners of the Wallabies and naming rights sponsors of the Castrol EDGE Rugby Championship," Hall said.

"We wanted to share our Castrol heritage with the Wallabies as they travel through regional New South Wales on their 'Bush to Bledisloe' tour.

"Castrol EDGE is all about strength and performance under even the most extreme conditions and the link between Castrol EDGE and the mountain is significant, with 19 Bathurst victories won on Castrol oil.

"The launch at Mount Panorama has allowed the Castrol EDGE brand to bring together two high performance partnerships and showcase the strength required to compete at the highest level," she added.

The 'Bush to Bledisloe' tour is the brainchild of Wallabies coach Ewen McKenzie and is designed to bring passionate Rugby supporters closer to the national team than ever before, with a range of community activities planned across a number of regional NSW towns.

McKenzie said the squad enjoyed the opportunity to launch the Castrol EDGE Rugby Championship alongside some of Bathurst's elite.

"Our Bush2Bledisloe regional road trip is a really important piece of our preparations for the Castrol EDGE Rugby Championship, and we know it will serve as a strong platform for when the tournament kicks off next week," McKenzie said.

"We also very much enjoyed today's experience and learning more about Mount Panorama, an iconic location in Australia.

"Personally, I'm also an avid fan of motor racing, have been to the Bathurst event before, and physically walked the track a few years ago. It's great to be back and share in this opportunity with some of racing's legends."

Tickets for the 2014 Castrol EDGE Rugby Championship are on sale now via Ticketek.