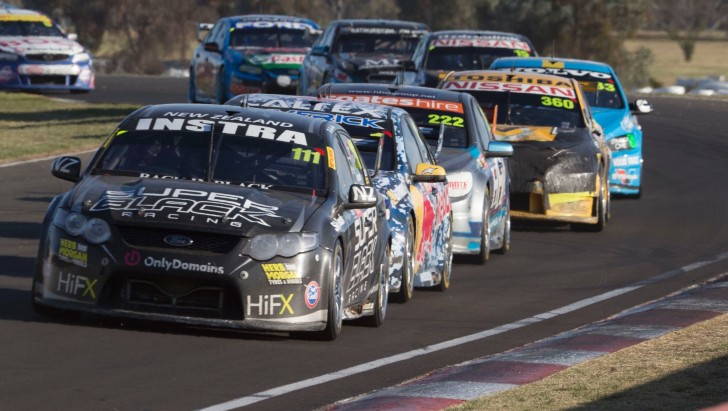 After a successful run with a wild card entry at the Supercheap Auto Bathurst 1000, Super Black Racing is even more enthused about running full-time in the V8 Supercars Championship in 2015.

Team manager Greg Hahn was astounded by the following of the #111 Falcon across the weekend, which finished an impressive 11th despite neither young driver having raced in the category at the challenging Mount Panorama circuit.

Hahn was proud of Ant Pedersen and Andre Heimgartner's work behind the wheel - and the effort of the crew, which was sourced by Ford Performance Racing, which also supplied the Falcon FG raced.

"Probably the best thing that has happened is there's just a massive following from New Zealand motorsport and New Zealanders in general - it's been really huge," Hahn told v8supercars.com.au.

"For a bunch of guys that just came together to do it, we had a really good result. If that's the start of it, it's going to be good."

The goal for the team was just to finish the race - and with a number of more high profile entries not making it to the end it looked like a steep challenge.

"We went out there very humble, we didn't talk ourselves up, we had reasonable expectations to finish, we could've finished better but sometimes you've got to learn the hard way," Hahn said.

"To all come together five days earlier, with two guys who have never really driven a V8 Supercar properly - over a couple of days they just keep cutting out laps, keep consistent, and we hit a solid result.

"To be still on the lead lap is still a massive achievement for team Super Black ... I've already stared planning for next season and we'll go into discussions for securing a REC [Racing Entitlements Contract] for next year."

Hahn described Bathurst as the team's first taste - and now, they want to build on that.

"I guess Bathurst was really a shop window to show people that we can pull it together, we do have a good car, we have a good team... We want New Zealanders, we want companies to come on the journey and we'll keep building it so we have two, maybe three cars by the end of the [2015] season."

Operating in conjunction with FPR was the right choice, and Hahn insisted that relationship would be a key part of a 2015 Championship appearance.

Drivers is another question - particularly given both Pedersen and Heimgartner performed well. Choosing between the two is one decision Hahn doesn't want to make - taking him to the point of talking about running two cars.

"It will be a battle and we're trying to get things together so we can potentially have two cars in some sort of configuration. But it may come down to having to make a really hard decision and I certainly wouldn't look forward to that.

Pedersen told v8supercars.com.au he was rapt with the result post-race, but was a little disappointed they didn't finish even higher.

"It's a great result for us but I'm disappointed because we were looking good there for a top five potentially - top six at the least - but the fuel number just wasn't quite on.

"It's very hard to swallow... Frustrating."

It was a matter of adapting to the FPR Falcon and keeping it clean on Sunday.

"The speed came slowly for us and we just grew in confidence in the car and what we were doing in the car," Pedersen said.

"Like I've always said, we weren't going to win the thing. I always said, let's just get through the weekend and we have, so that's great."

The wild card entry scored 144 points for its Bathurst effort and finished ahead of the FPR entries of Jack Perkins/Cameron Waters and David Reynolds/Dean Canto, after both also looked on for strong results.