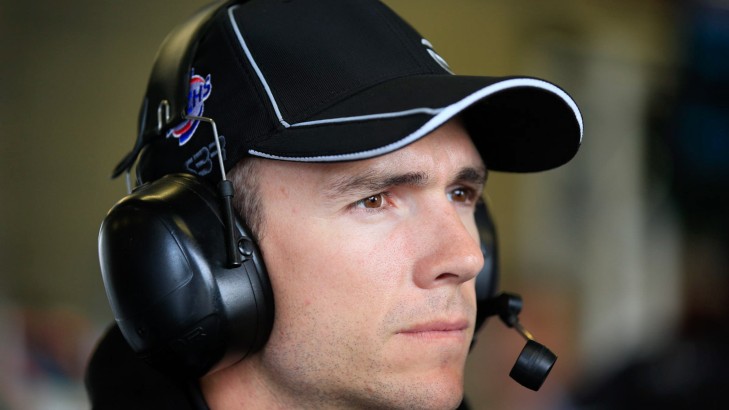 Erebus Motorsport's Lee Holdsworth is confident there will be no hangover for him from the biggest crash of his career when he drives out of the Mount Panorama pits for the first time at next month's Supercheap Auto Bathurst 1000.

Holdsworth walked away uninjured from yesterday's 200km/h-plus smash into the fence at the esses on lap 131 of the Wilson Security Sandown 500 after an as-yet undiagnosed failure in the rear-end of the Mercedes-Benz E63 AMG he was sharing with Craig Baird.

"I might be a bit cautious for the first couple of laps, but we have all had crashes in our career and this one was a bit bigger than the others, so you just have to take it as another one," Holdsworth told v8 supercars.com.au.

He even thought the accident might act as a boost in confidence rather than a knock!

"As a race car driver you just want to go fast and that (accident) probably gives me a little more confidence than anything that I have a safe car."

The dramatic accident has had an immediate impact on the team's plans between now and Bathurst. A Tuesday ride day at Calder Park has been cancelled and the car is on its way back to the team's Yatala workshop in Queensland.

The damaged chassis will be stripped back to bare bones, an investigation made into what failed in the rear-end of the car and a call made whether to repair it or press the team's spare car into service for the October 9-12 second round of the Pirtek Enduro Cup at Bathurst.

But on the basis of what he was seeing at the track last night, Holdsworth ventured the opinion that the car could be repaired.

"I think the chassis has a couple of dings in a couple of tubes but it doesn't look too bad. In my opinion it looks repairable, so it's up to these boys to get to the real story."

Holdsworth said the accident was undoubtedly the biggest in his career.

"I have had one at Winton where I have backed into the wall in 2007 I think, at turn four. But nothing like this and I had so much time to think about it this time.

"Top speed up the back straight is 265km/h, I was just short of the limiter and I hadn't got to the brakes yet. I can't imagine going through the grass I was washing off a hell of a lot of speed. I can only imagine I went in at a little over 200km/h."

Holdsworth's wife Alana, baby daughter Ava, his parents and other family members were in attendance at the track when the accident happened.

"Everyone was pretty concerned but it was good that people saw me walk away from it and that took away a little bit of the concern."

'It was the scariest moment of my life!'

We can beat Jamie at Bathurst: Tander

Sandown champs do it again

Murphy sprints up to second

14/09/2014
Stay In The Know
Sign up to the Virgin Australia Supercars Championship Newsletter
We use cookies to ensure that we give you the best experience on our website. If you continue to use this site we will assume that you are happy with it.Ok