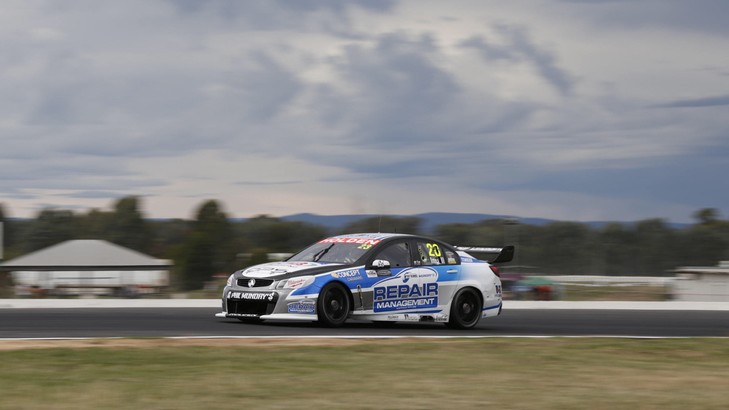 Investigating officer Jason Bargwanna believes there is sufficient evidence to further examine comments by Russell Ingall yesterday, as the investigation into his conduct continues.

Ingall was on for a podium finish in yesterday’s first 100km race at the Winton 400, the only driver to pit for fresh tyres and carving through the field.

Frustrated after cars on older rubber did not give way, he tapped Wilson Security Racing’s David Wall into a spin and was dutifully dealt a pit lane drive through penalty, ending his chance at glory and infuriating the V8 Supercars veteran.

Ingall claimed Wall had been blocking him for a number of laps before the contact, though his team Lucas Dumbrell Motorsport did not lodge a complaint about blocking with race control.

Ingall aggressively argued the penalty post-race live on Channel Seven and to attending media – and Bargwanna will not accept Ingall’s attitude towards the stewards.

“There is emotion in this and we all know how important it is,” Bargwanna said.

“When you are on for a result there is a lot of passion involved.

“At the end of the day Russell has the opportunity to have his opinion. He might not like the decision but once you start to attack the officials, that’s stepping over the line.

“Then it’s my role to investigate that from an Investigating Officer point of view and find out whether that is a breach of rule 6.5.4, which is bringing the sport into disrepute, as well as threatening actions and words, which is 6.5.13 and unacceptable.”

One of the Repair Management Racing Australia driver’s sore points was that he was penalised immediately while a number of incidents in the same race were up for review after the 34 laps had played out.

But Bargwanna felt the incident was clear and did not need further attention.

“Let’s go back to the start of the year when I made it very clear we were going to deal with these instances on the track if we can, rather than do it later.

“We’ve had a number of cases where we have looked at it after (the race) but if the evidence is really clear and it’s simple for us to see if anyone’s at fault we will issue a PLP (pit lane penalty).

“With the amount of laps to go it (a PLP) was there to be issued.”

Ingall currently sits 13th in the Championship points after dropping out of the top 10 yesterday. He starts this afternoon's 200km race from 16th.

Russell Ingall  ›
15' Repair Management/Team CoolDrive ›
2014 Winton 400  ›
Stay In The Know
Sign up to the Virgin Australia Supercars Championship Newsletter
We use cookies to ensure that we give you the best experience on our website. If you continue to use this site we will assume that you are happy with it.Ok