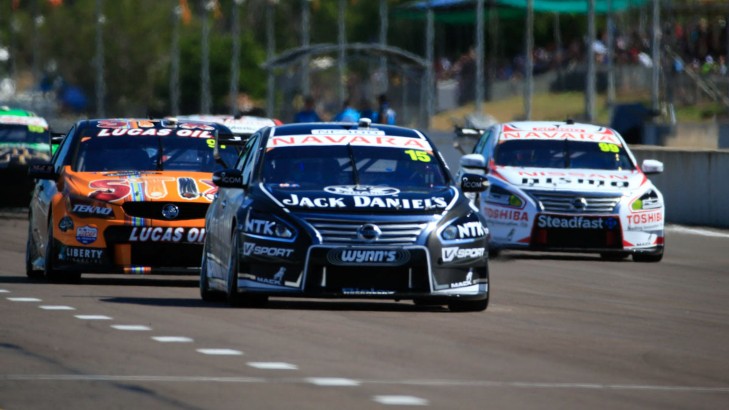 Penalties were handed down this morning after yesterday's action packed races at Hidden Valley, with drivers apologising and focusing on better runs today.

Rick Kelly clashed with Fabian Coulthard off the start of the second race, pushing for a race victory after earning ARMOR ALL Pole Position. He was immediately given a drive-through and admitted his focus was on earning his first Nissan win.

"I just wanted that win so bad," the Jack Daniel's racer said.

"I wanted to do everything I could to maintain a lead into turn one, but it just wasn't there for us.

"Lessons learned there for me, there's no doubt, just apologies to Fabian (Coulthard) for making that mistake, and not only wrecking our race, but destroying his as well.

"It's not what I wanted from that, but at the end of the day we are here to have a crack, and unfortunately it was just a little bit too much."

James Courtney was involved in a clash with Shane van Gisbergen and Garth Tander at the end of the first race, and while no one was putting their hand up to take the blame, Courtney admitted fault on social media this morning, poking fun at his comments during the break.

Nick Percat clarified comments he made on the TV coverage which seemed to be aimed at Jamie Whincup after substantial cosmetic damage to his car.Andre Heimgartner and Will Davison, who began the incident, were cordial on social media.

And Whincup told Auto Action he apologised to Coulthard after being caught up with him in yesterday's first race.

"I apologised [to Coulthard] for the incident, he was a bit of an innocent bystander," Whincup said. "I don't think I did anything reckless, but the situation was pretty unfortunate."

Lowndes saves a tear for Brocky

20/06/2015
Stay In The Know
Sign up to the Virgin Australia Supercars Championship Newsletter
We use cookies to ensure that we give you the best experience on our website. If you continue to use this site we will assume that you are happy with it.Ok