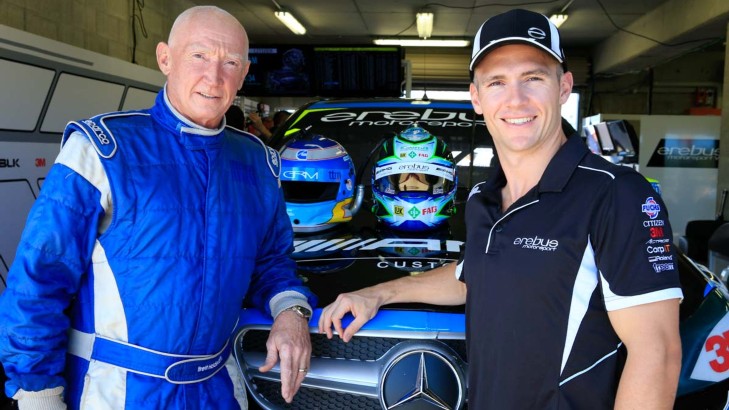 'Holdsworth' is a name we're used to seeing on the window at a V8 Supercars weekend. But at the SKYCITY Triple Crown there were two of them circling the track - and one on the window of a Commodore.

"He's here to get miles in before the enduros, they're announcing him as Russell Ingall's co-driver!" Lee Holdsworth joked to v8supercars.com.au about his father Glen, who competed and had a ball in the Commodore Cup in a V8 VH Holden.

"It has been a bit weird actually - I think this is the first V8 Supercar round he raced at, he's only done it for a few rounds in his lifetime so he's just started to blossom at the start of his career when he's 63," Lee continued.

"But he enjoyed it, it's good to see him out there and having a crack."

Glen's best finish was 19th in the 36 car field, in race two of three over the weekend at Hidden Valley.

Lee said that while his dad gave he and brother Brett plenty of advice and assistance as young racers, it was amazing he had not ever raced himself until the boys got into it.

"I guess he's pretty proud for one of us make it through to the V8 Supercars, and now he's having fun himself. He can tick it off, he has a few things on the bucket list...

"It's funny because he always had a really good skill and knowledge about motor racing - cornering lines and braking and all the rest of it, and he taught us everything we know in go karts - for someone who hadn't raced. So he's been an awesome mentor and great support."

Glen joked, had there been another five Commodore Cup races he would have finally won, after improving in his first two runs.

"I'm having a great time," he said on Sunday. "I was finding the celebrity status rubbing off on me, I've been getting plenty of waves from the crowd!

"I'm very familiar with this class because I actually ran this class for about three years down south as category manager so I understand the cars and how they operate really well."

Glen heads to most of the V8 Supercars rounds to support Lee and was proud of his son's ability to crack Australia's biggest motorsport category as a full-time driver in 2006, and rack up three career race wins over the years.

"It's a long, long story," he said of Lee's progress in motor racing.

"But the thing that always sticks in my mind is his bedroom and the two photographs he had on the wall - one of Ayrton Senna in the pits and one of him in go karts in the pits. The whole philosophy was he was going to move from that to that, and he did it, so it's great to see him living the dream and getting there.

"It's a good story - I'm sure every race car driver in pit lane has a story like that, and parents are always instrumental."

Lee Holdsworth  ›
15' Erebus Motorsport ›
2014 SKYCITY Triple Crown Darwin  ›
Stay In The Know
Sign up to the Virgin Australia Supercars Championship Newsletter
We use cookies to ensure that we give you the best experience on our website. If you continue to use this site we will assume that you are happy with it.Ok