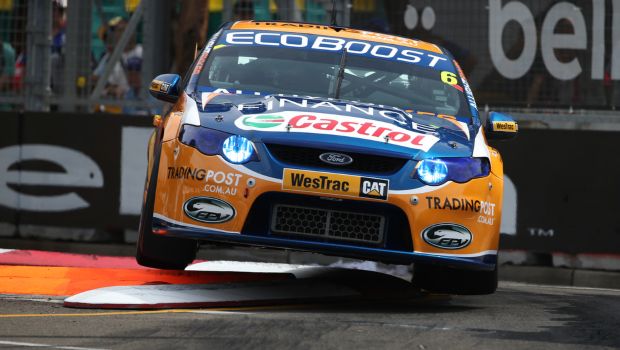 THERE are no championship points given out in the V8 Supercars Championship for qualifying speed but it’s one of the major highlights on a race weekend as drivers show just how speedy they and their machines are over one flying lap.

Tradingpost FPR Falcon pilot Will Davison claimed the ARMOR ALL Pole Position Award for the most poles – eight – of the 2012 championship.

In doing so, Davison broke a four-year stranglehold on the pole award (and the $20,000 cheque that goes with it!) by Whincup and gave his team something to collect at the end of season Gala Awards.

But was the Bathurst pole-sitter – who also created history by taking three poles in one session in Abu Dhabi - the best man over the season?

The statistics would suggest he was – but only just.

Up until the last race of the year in Sydney – where he qualified on the front row of the grid – Davison trailed Champion Jamie Whincup in terms of average qualifying position over the season.

But with the Holden ace displacing a tyre bundle and causing a red flag in qualifying (which meant his fastest time was scrubbed and he was not permitted to re-join the session), thus lining up back in a season-worst 24th, that opened the door for Davison’s average to move to P1 for the year.

Over the 30 races, Davison’s average qualifying position was 4.2 compared to Whincup’s 4.6, though Whincup had been sitting at 3.9 prior to his Sydney slip up.

Only Davison’s FPR teammate Mark Winterbottom was in the top two’s league in qualifying this year, averaging a starting position of 4.8.

Despite having five pole positions for the season, Craig Lowndes fell away in the second half of the year and didn’t have consistency over the year on the whole, therefore his average slipped to 7.3.

In fact, while Davison qualified in the top three 20 times and Whincup 19 times, Lowndes could only manage it seven times over the year.

It was this statistic that proved damning in his charge for his fourth championship in the second half of the season, which slipped away after he and Warren Luff paired up to win the Dick Smith Sandown 500.

While teammate Whincup started from the front row of the grid in eight races straight from Bathurst to Winton, Lowndes didn’t appear anywhere higher than fourth on the grid in the same time.

He also didn’t out-qualify Whincup for seven races straight, only achieving it in both races in Sydney well after the title had been decided.

With an average in this period of 10.2, Lowndes qualified outside the top 10 five times and found himself stuck in the pack more often that not as Whincup raced away with the title.

It was a good year for first-time pole-sitters with David Reynolds (Townsville), Shane van Gisbergen (Sandown) and Tim Slade (Sydney) all rewarded for their strong seasons by claiming some of ARMOR ALL’s cash along the way.

At FPR, Davison out-qualified Winterbottom 18 times to 12, while Whincup out-qualified Lowndes 20 to 10 over the course of the 30 races.

While the races were clean-swept by TeamVodafone and Ford Performance Racing, qualifying at least saw some other teams and drivers enjoy some time – albeit brief – in the sun.

10/12/2012
Stay In The Know
Sign up to the Virgin Australia Supercars Championship Newsletter
We use cookies to ensure that we give you the best experience on our website. If you continue to use this site we will assume that you are happy with it.Ok