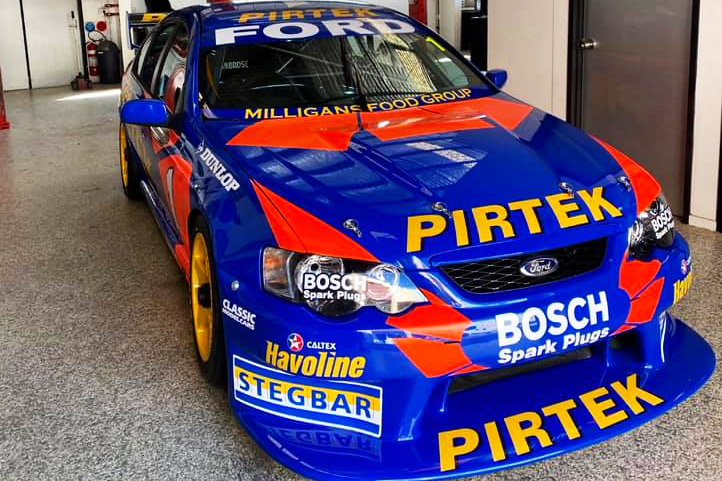 Restoration works on the PIRTEK Falcon synonymous with Marcos Ambrose’s golden run in Supercars are now all but complete.

Ambrose drove the BA02 chassis to successive championship triumphs in 2003 and 2004, also sticking with it into ’05 as he chalked up another five race wins before heading to the US to move into the NASCAR scene.

Popular among fans, the Stone Brothers Racing car is owned by Supercars Hall of Fame brothers Ross and Jimmy Stone.

Jimmy had told Supercars.com in January a six-month mission was in the works to complete the restoration.

“We never had enough money in our days to ever leave one car together and build a new one, so we always had to rob all the bits off it and now I’ve got to get to work to put it back into a complete car,” he said at the time.

Right on schedule, Ross took to social media to post a photo of the famous Ford accompanied by an update of what’s next.

That refers to the Caltex-backed BA03 Falcon that Ambrose’s SBR teammate Russell Ingall drove to the 2005 title, completing a three-peat for the team.

Ross Stone’s workshop in Yatala, Queensland, will play host to Team 18 for the coming weeks as Victorian and Sydney-based Supercars squads take refuge in the lead-up to the BetEasy Darwin Triple Crown next month.