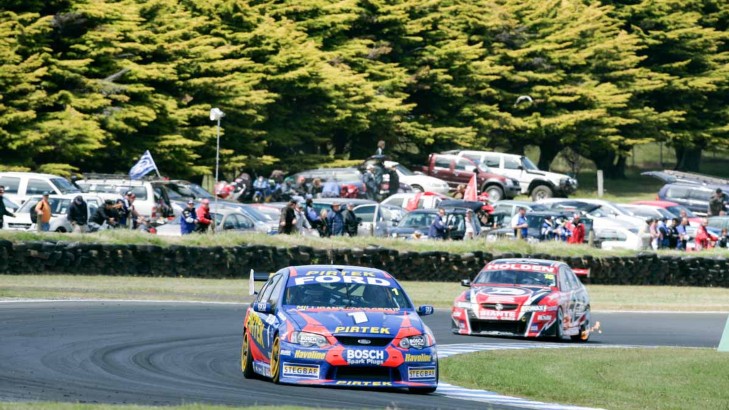 Whether it's at a test day or corporate ride day, DJR Team Penske wants to get former Champion Marcos Ambrose into a V8 Supercar as soon as possible.

Having only used one of three allocated independent test days this season, the team has some time up its sleeve if it was to wait until the end of the year, when Ambrose will spend time in Australia ahead of his relocation from the USA.

"We obviously have a few races left this year to be able to complete our Championship and our focus is on that at the moment," Dick Johnson said when asked about using team test days to work on Ambrose's development ahead of the 2015 season start.

"If the opportunity came up and Marcos was out here we'd try to utilise it, along with some corporate rides and things like that to get a feel for the car."

Ambrose believes the restrictions on testing would make it tough to settle back into a V8 Supercar.

"We have to work within the guidelines the series sets," he said.

"We have a test day or two left I believe in DJR's allotment of testing, plus we have the ability to do some media rides and corporate rides, and we're going to look at getting as much seat time as possible for me, just to get me used to sitting on the right hand side again. As much as anything I have to get used to shifting with my left hand and sitting on the wrong side of the car for me!"

Testing rules have changed for 2015 - rather than having three independent days, as well as the season launching Sydney.com Super Test, that time will be incorporated into Fridays at eight Super Sprint rounds across the calendar, with just one discretionary day.

Funnily enough, that extra time will not be at the two tracks Ambrose is yet to tackle in a V8 Supercar, having left the category at the end of 2005 before the Super Street Townsville and Sydney races came onto the calendar.

"The other factor that comes into play for me are the tracks and when you look at the schedule for 2015 there are two tracks I haven't raced on, a couple of tracks have had some changes to the circuit, so I'll be looking to get some track time - maybe not necessarily in a V8 Supercar but in another race car."

While the schedule in V8 Supercars will not be as hectic as he is used to in NASCAR, Ambrose will completely devote his time to returning to the top.

"My focus to do this properly is completely on V8 Supercar for DJR Team Penske and I don't envisage doing any other (racing) than that. There's plenty of effort and work required to get that job right and I'm very happy to be focused on that one thing."