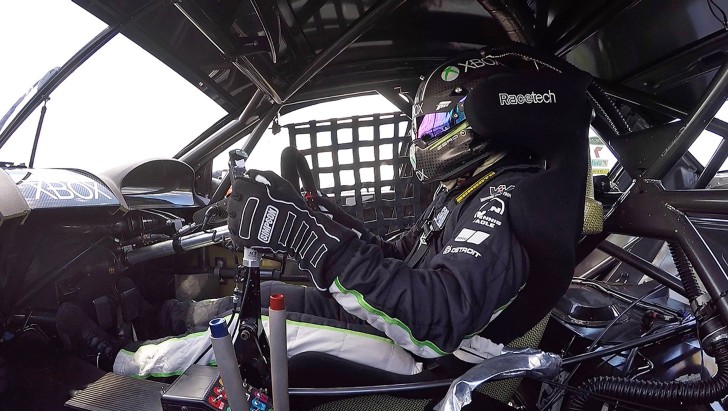 While many competitors have praised the former NASCAR driver's abilities, Ambrose reiterated that the goal in his XBOX wild card entry would be to "survive" the scathing Sydney streets.

"It's going to be a jump in the deep end, [I'll] just try to survive Sydney," Ambrose told v8supercars.com.au.

"But I'm learning all of that stuff that I won't need to when I get to Clipsal. So it's certainly fast-tracking our 2015 campaign."

The wild card entry into Homebush will give Ambrose and his team plenty to think about over the off-season and hopefully help them get on the front foot before he fights for Championship points next year.

While the 38-year old has been reasonably comfortable in the Ford Falcon FG while testing, he agrees everything will be different when 25 other V8 Supercars are thundering around the concrete-lined street circuit alongside him.

"It really will be, and I've had now three days on my own, but you don't really know how you stack up until you're in front of everybody and everyone's around you," Ambrose said.

"Just learning the track, learning the race formats as well - obviously the qualifying deal is much different now, they go out and warm up tyres and so forth - so I've got a lot to learn on the Friday and I'll just try and take my time with it.

"My goal for the weekend is just to finish all the laps and get some experience."

There are differences with the New Generation V8 Supercar compared to the Project Blueprint SBR Falcon he drove years ago, and Ambrose is impressed with the new spec car.

"Really the hardest part to get comfortable with is [to] get the brake zone deep enough.I'm learning the new shifter as well, the sequential box - something new for me.

"But I'm impressed by the comfort of the car, the car feels pretty comfortable to hustle around the track here.

"It's been hot days every day we've been out in the car, so the grip level's not there - but the speed will come when we get good track condition.

"It's just been a blast so far, I've really enjoyed it."

Ambrose will work with the team's most experienced V8 Supercars engineer Mark Fenning at Sydney, who this year has run Scott Pye's #16 DJR entry. The 'Devil Racer' was appreciative of the work required for the team to extend and run an additional car at the final event.

"It's been a big effort for this team to build this car up - to stretch the staff to their thinnest level to try and run three cars at Homebush is not going to be easy. But I think it's definitely worth it for me as a driver and as a team just getting used to me, and me getting to know the guys."

Compared to a NASCAR? It would be easier to list the very few similarities!

"They're so different, it's a very different discipline - these cars roll, good corner speed, you've got to be on part throttle a lot just trying to carry momentum," he explained.

"Whereas a Cup Car, it's got so much horsepower you're either on the loud pedal, or you're on the brakes, there's no in-between.

"And these cars are finely setup as well, they've got a lot of nice new stuff in the cars to make them setup really well.

"It's just fine-tuning really. One millimeter here, two millimetres there can make a big difference, whereas in NASCAR you can bend the rear end by half an inch and it doesn't make a lick of difference."

Secure your tickets for the Sydney NRMA 500 now and see Ambrose in the flesh, for his first drive of a V8 Supercar in nine years, at a daunting new track.