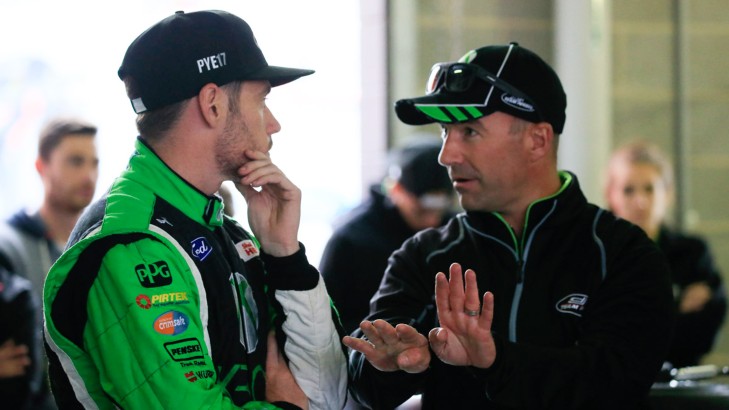 Marcos Ambrose's illustrious career in V8 Supercars appears to have come to an end after team owner Roger Penske announced he would not return as a driver next year.

The announcement appeared to come as a surprise to teammate Scott Pye who said he'd not spoken to Ambrose but heard the news through a media report.

Pye enjoyed the chance to race with thetwo-timeV8 Supercars champ in the enduros and while they did not get the results they were after, the DJR Team Penske Ford Falcon FG X featured at the front at times in the long distance races.

"To be honest I do not want to comment too much on it because I only saw it sitting on the loo I read it," Pye said.

"I haven't actually heard from Marcos today so it is not for me to say.

"He did a fantastic job for us this year and I am really grateful that he gave me this opportunity and fortunately I've been able to do a good job."

In an earlier interview, Penske suggested he did not think Ambrose would want to continue on behind the wheel.

"I think Marcos feels - 'I'm either going to be in, all the way in and drive as a primary driver, ormaybe not be a driver in the endurance races'," Penske told V8 Supercars media.

He has since confirmed Ambrose does not want to co-drive - meaning the two-time V8 Supercars champion would not achieve his goal of winning a Bathurst 1000.

Ambrose is yet to publicly announce his plans.

The 39-year old was a key part of Penske's foray into V8 Supercars and it is fitting on the day his decision to stop racing was made public, Scott Pye earned his first podium in the series.

Ambrose won the V8 Supercars Championship in 2003 and '04 and announced the following year he would tackle NASCAR. He spent nine seasons in the United States, and during that time recorded two wins in the NASCAR Sprint Cup Series.

His much-anticipated return to V8 Supercars started with a wild card entry in last year's Sydney 500 before DJR Team Penske officially began in 2015.

Even after stepping back from driving full-time, Ambrose has supported the team at the track. Penske said he have a place with the team as long as he wants one.