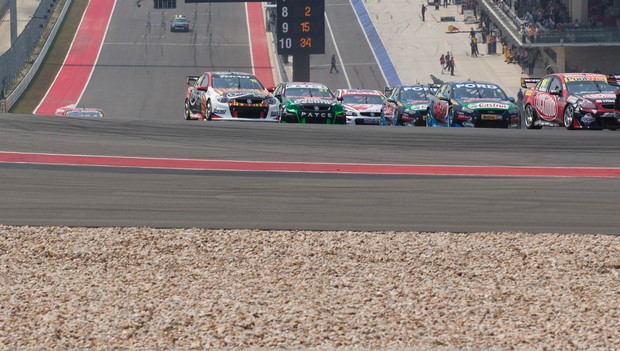 A revised version of V8 Supercars’ control Albins transaxleis about to start testing.

However, which car it is being installed in is not beingofficially announced.

Evaluation should include some running during practice sessionsfor the SKYCITY Triple Crown in Darwin in mid-June. It will not stay in the carfor qualifying or racing.

The Australian designed and developed transaxle is one ofthe key control components in the new Car of the Future V8 Supercar.

But some teams have complained about both dog ring wear andgear teeth pitting, prompting Albins and V8 Supercars to mandate a minium shiftcut from the Tasmanian Championship round onwards.

Mandating the shift cut was done to eliminate a performance variable while Albins and V8 Supercars investigated the issues. A shift cut momentarily interrupts the torque output of the engine, allowing the driver to rapidly change gear while maintaining wide-open throttle. The intention is to rescind that shift cut rule once the issues are resolved.

Frustratingly, none of the issues reported by teams sincethe Championship began surfaced during more than 18 months testing in two CotFprototypes.

“The good shifts won’t be different to what they are now,but a bad shift will be improved by what we do,” explained Albins generalmanager Steve Macdonald.

The plan is to record several thousand kilometres of testingon the revised transaxle as quickly as possible to try and establish the worth ofthe changes. The target is for the highest stressed gears to be reliable for atleast 5000km.

“So you have to get good mileage on it in a car that isgoing to give it a hard loading so we get an indication that it’s animprovement.”

Macdonald said validation of the changes would unlikely bemade in time for the season of endurance. He also expressed grave reservation abouttaking the updated transaxle into the long distance races even if it was available.

“To front up with a whole new kit at Bathurst isn’t really awise thing. I personally would be running what we have got now at Bathurst,” hesaid.

30/05/2013
Related Content
2013 SKYCITY Triple Crown  ›
Stay In The Know
Sign up to the Virgin Australia Supercars Championship Newsletter
This website uses cookies to improve your user experience. By continuing, you will be providing your consent to our use of cookies.Ok