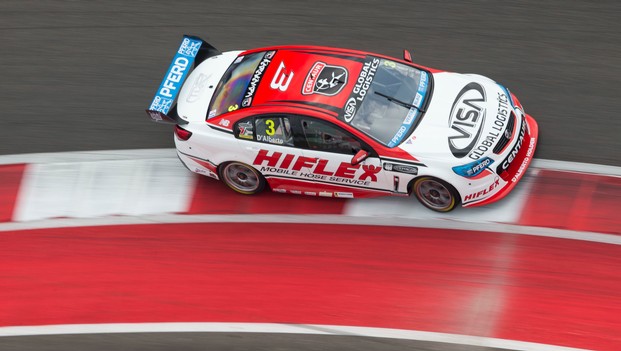 Tony D'Alberto Racing Team Owner Al D’Alberto says the small team isdetermined to have success at the next event, the SKYCITY Triple Crown at Hidden Valleyin Darwin. D’Alberto shared his thoughts on the team's position and the Championship so far.

Team HIFLEX had a great start to the year, leaving the opening event atthe Clipsal 500 in eighth place. Four events later and some frustrating resultssee you 18th overall. How do you rate your team's efforts so far this year?

AlD’Alberto: “Well it goes without saying I'd much rather we had headed inthe other direction.

“Sure,we have made some mistakes but not all of them have been of our ownmaking. We’ve made some changes over the first few events and I'm confident asthe year goes on we will start to see the results of all our team’s hard work.”

You've re-linked with Walkinshaw Racing for a technicalpartnership this year. You've been associated with them before. How hasthat relationship gone so far?

“Wehave moved back to the Walkinshaw group, and that was done after a fair bit ofconsideration.

“Lastyear, we were aligned with Prodrive (Ford Performance Racing) and they set thebar very high when we were with them.

“Althoughwe are not there yet, I think with Steve Hallam as the managing director atWalkinshaw, there is no reason why this relationship could not be even better.”

Walkinshaw Racing prepares the factory entries for the Holden RacingTeam and even for them solid, consistent results have been difficult to comeby. Do you feel they are heading in the right direction – both for themselvesand your team?

“I'msure a lot of teams wish they were doing better and it’s no different forWalkinshaw Racing.

“Theyare a very competitive organisation and have a strong determination to turnthings around, both from our boys and theirs as well.”

Team HIFLEX is the only single-car team in the Championship at thispoint. While you have an alignment with a bigger organisation, essentially, yourun your own show. Can you tell us about some of the positives/negatives ofbeing a single-car squad in modern day V8 Supercar racing?

“That’strue, we are the only single car team in the field, and that makes it even moreremarkable that we can at times achieve top 10 qualifying and race finishes.

“It’seasy to forget that this is an incredibly competitive Championship, and youonly need to be a little bit off to look a long way off.”

Can a single-car team like yours be consistently competitive in thistough Championship?

“Likeeveryone in the field we are always striving for more consistency, and it is avery tough Championship so improvements don't come easy.”

If you were in the right financial position, would you consider becominga multi-car team in the future?

“Yeswe would, but it’s not just commercial factors that would affect thatdecision. It would also be driven by performance on the track. We’re notactively looking at expanding, but it is never out of the question.”

Not only are you a small team, but you're a family-run team with yourson Tony D'Alberto as the driver. It must make for some interesting dinnerconversation!

“Notat all, we just don’t have dinner together!”

Some people assume that because Tony is the 'son of the owner' hisposition in the team is always guaranteed. Is that correct? If Tony felt hecould achieve more elsewhere, would you support him to drive for another team?

“Ihear the ‘father/son’ thing a lot and to be honest don't pay too muchattention to those type of comments. Both Tony and I are very determined to besuccessful.

“Ihaven't been involved in the team as much as I would like, but that will changefrom now on.”

From a sporting point of view, V8 Supercars has so many good stories totell this year – the introduction of two new manufacturers and the category'sfirst visit to North America. There have also been some negatives, with thereduction of revenue created for the teams and some internal frustrations(change of CEO etc). What's your position on the current state of the sport?

“Therehas been some great racing this year, it's great to see teams like BJR, GRM andTekno up there pushing the regular front running teams. It’s great to see newfaces winning races and I can't wait for our turn!

“Ithink the sport is well positioned to grow into the future, however I feel thata bit of stability would help the sport forward.”

What's the next big step for V8 Supercars to continue to prosper? Is itmore manufacturers? More overseas races? Better racing?

“Ithink we need to make sure we stay relevant to the auto manufacturers becausethey are the heart of our business.

“I'vebeen pushing for a more pronounced manufacturer’s Championship, because if weget that right and the rest will follow. We need manufacturers to want topromote their goods in our category.”

Your team won the Development Series back in 2007. You've re-enteredthat series again this year with Nick McBride. Is it still worth the effort ofentering a car in that series?

“Wedidn't plan to run in the DVS this year, but circumstances led us there, andI'm glad it did.

“Nickand his family are great people and a pleasure to work with, and I have nodoubt Nick will be further up the field at the next round in Townsville.His qualifying has been very good considering his short experience ina V8 Supercar.”

The V8 Supercars Championship heads to Hidden Valley Raceway in a fewweeks time. It has been a happy hunting ground for Walkinshaw Racing and Tonyin the past. Can we expect to see the #3 HIFLEX Commodore back up the pointyend?

“Yes.We’ve had a couple of strong performances at Hidden Valley in the past and weare very determined to continue our speed at that track.”

Tony D'Alberto  ›
15' Team CoolDrive ›
2013 SKYCITY Triple Crown  ›
Stay In The Know
Sign up to the Virgin Australia Supercars Championship Newsletter
We use cookies to ensure that we give you the best experience on our website. If you continue to use this site we will assume that you are happy with it.Ok