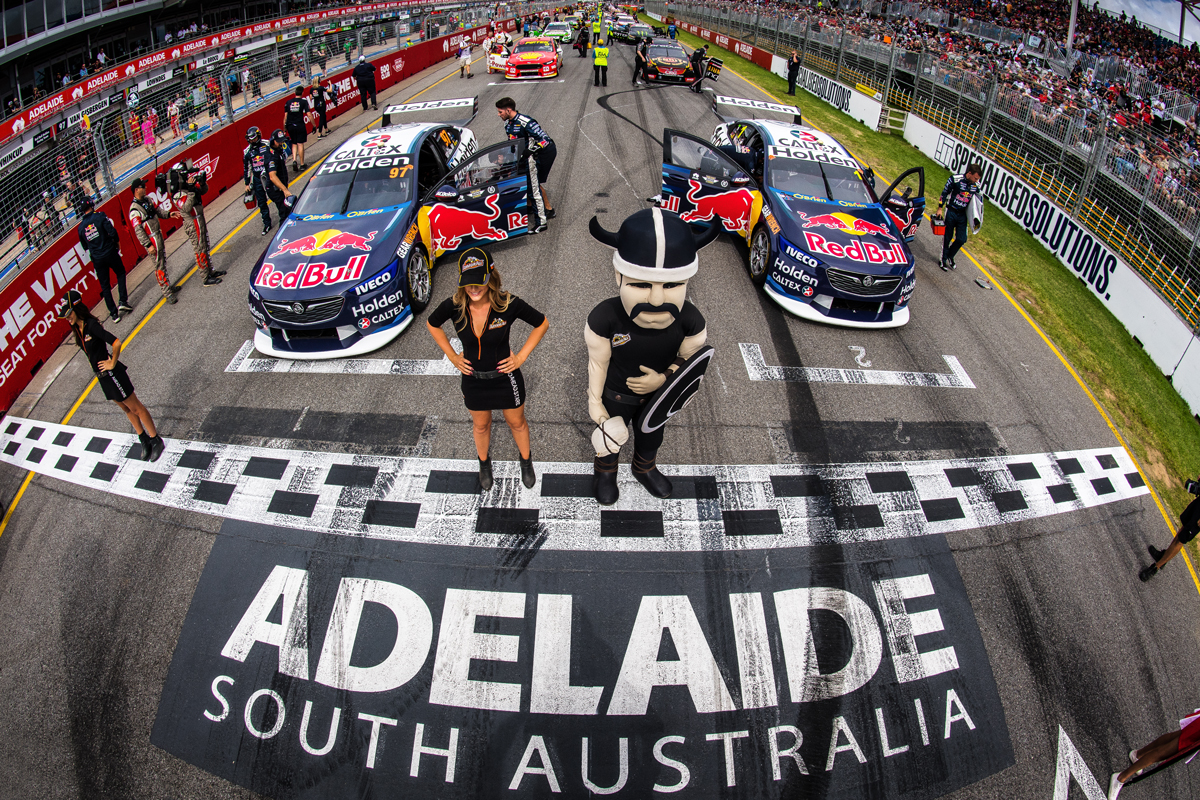 Drivers will have to think twice before lining up for the start of the Superloop Adelaide 500 races this weekend.

The grid has been altered ahead of the event’s 21st running, with ARMOR ALL Pole moving from the drivers’ right to now be on the left.

Pole had been on the drivers' right since the second running of the event in 2000, bucking the trend of most circuits, where the primary spot is on the inside for Turn 1.

Adelaide’s opening corners are a three-part chicane, with the left-right-left sequence bringing the cars onto Wakefield Road.

The grid change, which affects all positions in the order, has been made following recent consultation with drivers, including seven-time champion Jamie Whincup.

“I feel that being on the inside is an advantage and it’s peculiar that here it’s always been the other way,” Whincup told Supercars.com.

“If you go into Turn 1 side-by-side, then the guy on the right is going to have to yield, otherwise he’ll have to shortcut Turn 2, up over the kerb, which is not ideal.

“Even if he somehow gets through Turn 2 side-by-side, there’s no way he’s going to hold it around the outside of 3 either.

“The disadvantage you have now is you’re on the dirty side of the grid, but that’s the way it goes, you can’t choose pole position for the clean or dirty side.

“It should be based on if you’re side-by-side into the first corner you need to brake on, what’s the best place to be, which is on the inside.”

Last year, the ‘dirty side’ appeared a non-issue, with the second-place starter easily out-dragging the polesitter to the first corner on both occasions.

The other notable change this year is at the back of the circuit, with the tyre walls brought in at the exit of Turns 6 and 7.

Track limits at the exit of the two 90 degree right-handers proved a big talking point at the event last year, and threatened to cost Shane van Gisbergen the Saturday pole.

Van Gisbergen had driven outside a yellow line on the exit of Turn 7 during his ARMOR ALL Top 10 Shootout lap, triggering an investigation.

However, with the investigation showing that track limits issues were widespread, the breaches were not referred to the stewards, and no action ultimately taken.

The yellow line was altered for Sunday, but will not be required at those turns this year, with the exit tyre walls sitting directly behind the exit kerbs at both corners.

“It’s my wall I guess,” van Gisbergen smiled to Supercars.com when asked of the changes.

“It’s a street circuit, so the wall should be the track limits, there shouldn’t be yellow lines.

“It was an oversight last year, the line got changed and created a massive storm and now they’ve fixed the problem.

“It looked a bit stupid, everyone going over that kerb, so it’s a good thing they’ve changed it, but we’ll have to see if [having the walls closer] impacts the racing.”

Teams inspected the revised fencing on Wednesday, ahead of this evening’s opening practice.

Noted Whincup: “When asked about it after last year’s event, I was absolutely all for bringing the wall closer to the track so track limits are not an issue.

“To be honest I didn’t expect it to be so extreme, it’s right on the exit kerb, but if you move it back a metre, cars will leave the track and you’ve got the same issue as before.

“There’s a theory it’ll make the racing not as good, because before there were four or five different lines out of Turn 7, and now there isn’t.

“But I disagree, because last year when my rear tyres were going off, my car would oversteer in Turn 7 and I could just get on the gas and fly over the kerb, not losing a spot.

“This year, you don’t have that luxury, and if anyone makes a mistake at Turn 7 they’re going to be very vulnerable down the next straight.

“It could potentially up open passing opportunities, rather than dismiss them.”