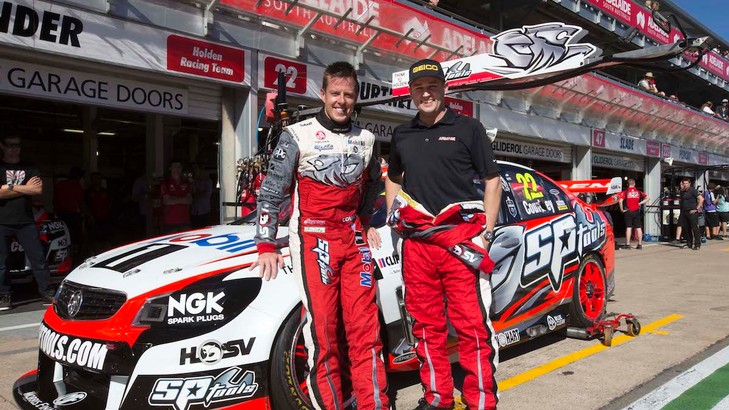 While four local boys – Tim Slade, Scott Pye, Nick Percat and Russell Ingall – battled it out on-track during the weekend’s Clipsal 500, Adelaide’s fastest racecar driver Richard Crampton was stuck in the pits. But he was smiling nonetheless.

But rather than sit at home on one of the few off-weekends in his 24 event season, Crampton made a flying trip home for the V8 Supercars season opener.

And it’s fair to say he loved every minute of his first Clipsal since the original Adelaide 500 back in 1999 when he took part in the drag racing demonstration.

In addition to attending to a number of media engagements, Crampton visited the Red Bull Racing Australia team garage with (RBRA engine supplier) KRE’s Kenny McNamara, spent time hanging out in the Tekno Autosports garage, while he also enjoyed a hot lap with Clipsal winner James Courtney on Friday.

“The whole weekend was just great, there’s no other way to describe it – to be able to come home and spend a weekend like the one I had at a world class event like the Clipsal 500 was just amazing,” Crampton said before stepping on the plane back to Indianapolis.

“I spent most of the weekend in the Tekno garage with Shane van Gisbergen, Jono Webb and Steve Hallam, and that was pretty special in itself – they’re great guys and were extremely welcoming.

“Tekno use Lucas Oil products, which is owned by the Lucas family who I race for, so it was good to see what they do. Being a car guy, being up close and seeing the nuts and bolts of the engineering side of things was very interesting.

“To have the success they did on the weekend with two podiums and a pole capped it off.”

On his ride with the eventual Clipsal 500 Adelaide winner, Crampton said it was an experience he’s unlikely to ever forget.

“I knew V8 Supercars were good and I watch every race I can back in Indianapolis, but I’ve got a whole new perspective now,” Crampton said.

“The ride was the most fun I’ve had in a race car for a long time and I can’t thank James Courtney and the Holden Racing Team enough. The way V8 Supercars stop and turn and get so close to the wall – that was definitely a thrill that I’m going to remember for a long time.”

Crampton said it was difficult to compare a 650 horsepower V8 Supercar with his 10,000hp Top Fuel dragster.

“It’s like comparing apples to oranges. A Top Fuel dragster accelerates to 330 miles per hour (530km/h) in a little over three seconds, and that’s a lot of fun. But the fact that these V8s stop and turn as well as they do us amazing, and the straight-line speed is very impressive as well,” he said.

“I was as nervous riding along as I’ve ever been, so that’s saying a lot because these cars are very impressive to ride in.”

While it was a fun trip, there was also a business side to the weekend, with Sam Dale, Vice President of Sales and Marketing for Lucas Oil Products alongside, with the company looking to expand its presence in the Australian market.

Crampton is a great “boy makes good” story, having left Australia for America 10 years ago and had worked as a crew-member on various teams ever since, joining MLR seven years ago. 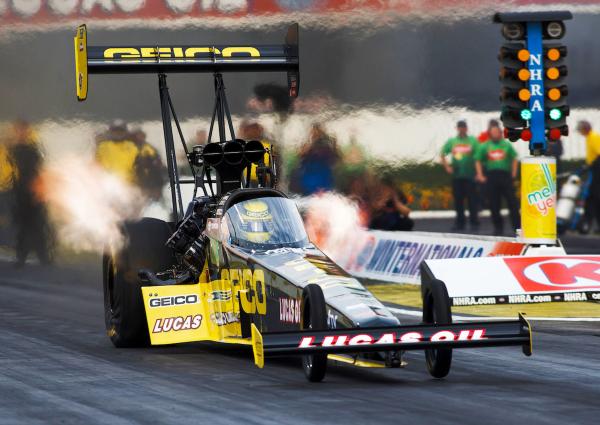 The 33-year-old realised his dream late last year when team owner Morgan Lucas selected the Australian as his replacement in the GEICO/Lucas Oil car – Crampton now running for the NHRA’s prestigious Road To The Future rookie award in the car which last year finished fourth in series points.

After two events, he sits ninth in series points with the next event the Gatornationals in Gainesville, Florida on March 13-15.

“While I enjoyed Clipsal, I'm now looking forward to Gainesville, not only to get back in my race car, but it’s also going to be a special event for our team with [Lucas Oil founder] Forrest Lucas being inducted into Don Garlits’ International Drag Racing Hall of Fame, and Morgan joining us in a second team car as one of the eight races he’ll be doing this season."