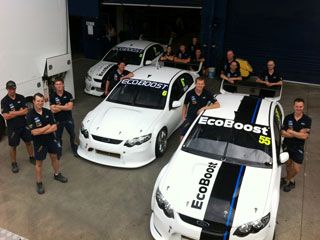 Will Davison and Mark Winterbottom will undergo a maximum 20 laps of shakedown today before embarking on the team’s first three-car test – part of the 10 test days allocated for next season.

The cars are sporting a largely white colour scheme ahead of the livery launch with their new sponsor Pepsi Max Crew in February.

Alex Davison, who has signed to race with the team next year, is also expected to get his first taste of the Car of the Future Falcons tomorrow afternoon.

Other teams also expected to test at Winton include the Holden Racing Team and Garry Rogers Motorsport.

Check back to the BigPond Sport site for updates from testing at Winton today and tomorrow.