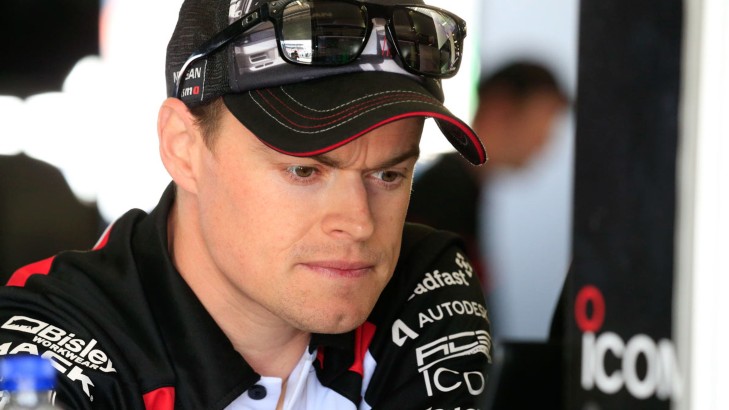 Secured by a multi-year year deal with Garry Rogers Motorsport, James Moffat says he is confident he can deliver the front-running pace the team is expecting from him in the #34 Wilson Security Volvo S60 V8 Supercar.

Moffat, 31, moves to the Volvo squad from 2016 after the completion of his three year deal at Nissan Motorsport, during which he achieved the factory squad's first and so-far only win and first pole position.

Highly regarded for his lap speed, Moffat is still yet to finish better than 16th in the drivers' championship, but believes he can forge forward in the Volvo, citing the performance of his good friend and future team-mate Scott McLaughlin.

"I think that is the most exciting thing for me, stepping into a pretty proven package," Moffat told v8supercars.com.au.

"I think essentially the speed of the package has always been there and that's encouraging," he said. "Hopefully it means we can be a bit more consistent throughout the year and be in a position to not only have a good drivers' championship, but have a good teams' championship swell.

"That is something that is important to consider. If there are two Volvos at the front of the field taking points off other teams, then that will be a good situation."

In the two-year history of the Volvo V8 Supercars program, the #34 has been driven by Swedish import Robert Dahlgren in 2014 and Sydney's David Wall this year.

Neither have been able to match the pace of the high-flying Kiwi McLaughlin, who finished fifth in the championship in 2014 with four wins and 10 pole positions. In 2015, despite various reliability issues, McLaughlin has still been able to claim three poles and has now edged his way into the fight for the championship top 10 despite sitting 25th after the first race of the year.

A solid points contribution from the #34 would be a huge boost in the teams' championship, which determines pitlane order and therefore represents a significant strategy advantage in pit-stop races.

"Hopefully it's a situation with the team where they can have two cars which are a bit more competitive regularly," said Moffat.

"I am looking forward to working with everybody there and hopefully we really push each other along, which I think we will do.

"It will push Scotty and myself but it will hopefully push the whole team along as well. No disrespect to the other guys (Dahlgren and Wall) but the team probably hasn't been in that situation in the last two years where they have had that.

Moffat shied away from making any big, bold championship predictions for himself, acknowledging that he will be on a steep initial learning curve. But he made it clear it was a challenge he was very happy to take on.

"For me it's all about going there and doing the best possible job and if that's good enough then great. If it's not to begin with, then I will just try and find ways to work harder and improve myself and try and get better.

"I will have some learning to do quickly that's for sure. No doubt the car will be different to drive compared to what I have been used to the last three years and I will probably have to make some adjustment in that. But I will have a very solid team-mate to learn off and look at his data to begin with."

Moffat dismissed any concerns that he and McLaughlin's friendship would get in the way of working effectively as team-mates, something Rogers admitted had played on his mind before doing the deal.

"I am looking forward to working with Scotty," said Moffat. "We already have a reasonable relationship as it is and that makes it easier. We don't have to worry about getting to know each other because we already know that.

"We already have a good relationship away from racing so we don't have to worry about starting anything new. We can just roll into next year and get on with it."

James Moffat  ›
Stay In The Know
Sign up to the Virgin Australia Supercars Championship Newsletter
We use cookies to ensure that we give you the best experience on our website. If you continue to use this site we will assume that you are happy with it.Ok