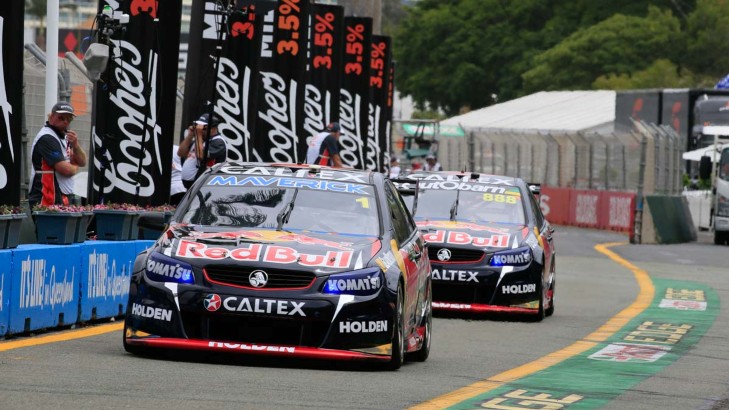 Red Bull Racing Australia has decided not to put any special strategies in place to boost Craig Lowndes' shot at the driver championship because they could also put at risk its stronger chance of winning the V8 Supercars teams' championship.

Heading into the penultimate championship event, the WD-40 Phillip Island SuperSprint this weekend, Lowndes is third in the driver's championship in his Holden Commodore VF, one point behind David Reynolds (The Bottle-O Ford Falcon FG X) and 240 points behind Mark Winterbottom (Pepsi Max Ford). A maximum 600 points remain to be won.

But in the teams' championship RBRA has closed to within 288 points of the Pepsi Max Crew, with a maximum 1200 points still up for grabs at Phillip Island and the championship grand finale, the Coates Hire Sydney 500. RBRA overtook the Holden Racing Team for second after the Auckland weekend, and now has a 101-point lead over the other factory Holden outfit.

"Definitely the teams' championship is a lot more achievable," RBRA team manager Mark Dutton told v8supercars.com.au. "The teams we don't need anyone else to do a bad job. In the teams, if we do a good job and we maximise, we can win it.

"The drivers? We need Frosty (Winterbottom) to be having a few shockers and things like that, so that one is not totally in control.

"So for that reason you just go for the obvious option and say 'let's control what we can control and let's just try and have two fast cars and give them the best opportunity to score maximum points'."

In practical terms what that means for Lowndes' championship bid is no special leg-ups will be given to him in races.

For instance, if Whincup is leading Lowndes in a race and a safety car is called, #1 won't be asked to drive past the pits to allow #888 to make a stop without stacking.

"If we follow that strategy that means one car is going to finish okay, but where is the other going to finish?" explained Dutton. "So you really shoot yourself in the foot as far as the teams' championship goes.

"We are definitely not in the mindset to be doing that, we are trying to score maximum points.

"It's one of those things. If we get both of them up there, then it's a good problem to have."

Being first to choose delivers strategic advantages, as well as prestige.

Triple Eight Race Engineering has had a lock on the teams' championship racing as Team Vodafone and RBRA, winning six times in the last seven years and the last four years in a row. Each year it has consistently parked itself as close as possible to pitlane exit.

Through Jamie Whincup it has also won six of the last seven driver's championships and the last four in a row. Lowndes hasn't won a championship since 1999 when he was racing for the Holden Racing Team, but in his 10 previous seasons at T8 he has finished second five times and fourth five times, contributing strongly to the operation's team's championship domination.

Prodrive Racing Australia, which entered the V8 Supercars championship the same year as Triple Eight in 2003, has never won a drivers or teams championship in its history.

While Winterbottom would now be unlucky to lose the drivers' championship, his performances have tailed off in the last two events. With injured Chaz Mostert being replaced by rookie Cam Waters (and co-driver Steve Owen in Sydney) means in the other Pepsi Max Ford, overall points production by the team is down, handing a big opportunity to RBRA.

Dutton explained there were at least three distinct advantages to being stationed at the head of pitlane.

"The first is you roll out first in qualifying and practice sessions. So you roll out on the track five second into the session, whereas if you are down the other end you might not get to pit exit for 45 seconds. So we have a capability for a bit more freedom with our sessions and especially those 10 minutes qualifying sessions.

"The second one is you can react at the very last second. The safety car has just been called and your car is two seconds from pitlane entry and even though the boys aren't ready out front, you have all that time as the car trundles down pitlane for them to set up.

"The third advantage is that you won't get blocked by a car from another team stacking as you go to exit your pit bay. It was seen perfectly on the Gold Coast where Shane van Gisbergen had to wait for a car 10 places behind him because it had pulled in front of him.

"That's not an issue when you are pit bay number one."