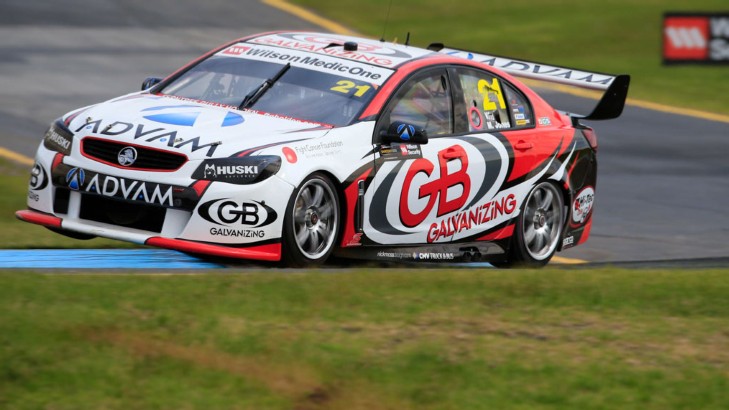 Macauley Jones experienced his first V8 Supercars Championship start last Sunday at the Wilson Security Sandown 500 and is pumped to hit Mount Panorama next month and reprise his role as a co-driver.

The 20-year old pairs with Dale Wood in the GB Galvanizing Holden Commodore and as strategy often dictates at Sandown, was behind the wheel when the lights went out for the first enduro.

While the pair ultimately finished 20th, Jones found the experiencing incredibly valuable, taking plenty away from the race and stepping up from the V8 Supercars Dunlop Series he contests throughout the year.

Now his focus is squarely on Bathurst - a track where victory has eluded the Jones family team.

For Jones, racing the 1000 is a dream come true. He will juggle both his Dunlop Series campaign and co-driving with Wood, which will guarantee him plenty of miles around one of the category's toughest tracks.

"I haven't thought about it too much," he said.

"With the Dunlop Series car we have a test day coming up soon and with the balance of the two cars, it will be great - no one's ever complained about too many laps around Bathurst!"

While the decision for Jones to race was a last minute call - which his father, team boss Brad Jones made with the team and its sponsor -it seems to have paid off with the car coming back straight and staying out of trouble at Sandown.

Jones believes the family team is the best place to develop his skills, as he looks towards his first ever Supercheap Auto Bathurst 1000 start next month.

"I really think it will be good and I've got a lot of knowledge around me for Bathurst - it's something my dad's always been passionate about and I've lived it through his world quite often," Jones said.

The morning of Sandown the 20-year old was calm and just looking forward to getting on with the job.

"It was quite nerve wracking at the start but we managed to have a good start and maintain position," Jones said.

"I actually felt quite good, to be honest.

"Once we did the intro on the grid and got a minute to just breathe and go with it - as soon as you turn the car on the nerves tend to go away and you're quite focused.

"[Your mind] goes onto the job at hand so I felt quite comfortable in it and felt I had a reasonable start -it wasn't quite the best but it definitely could've been a lot worse!"

Jones described the car as a "handful to drive" towards the end of his stint, and he and Wood ultimately fell down the order at a circuit that has never been kind to Brad Jones Racing.

However, despite the 20th place finishing position, the young gun took plenty away from the race and stepping up from the V8 Supercars Dunlop Series he contests throughout the year.

"All in all, it was a really good day for me and I learnt so much," he said.

"Something even as little as coming into the pits and coming out of the pits on cold tyres, you know - in the Dunlop Series we don't have to leave the pits and go flat out on cold tyres. So it's always good to get a feel for how each car handles, their tyre life and quirks like that."

17/09/2015
Stay In The Know
Sign up to the Virgin Australia Supercars Championship Newsletter
We use cookies to ensure that we give you the best experience on our website. If you continue to use this site we will assume that you are happy with it.Ok