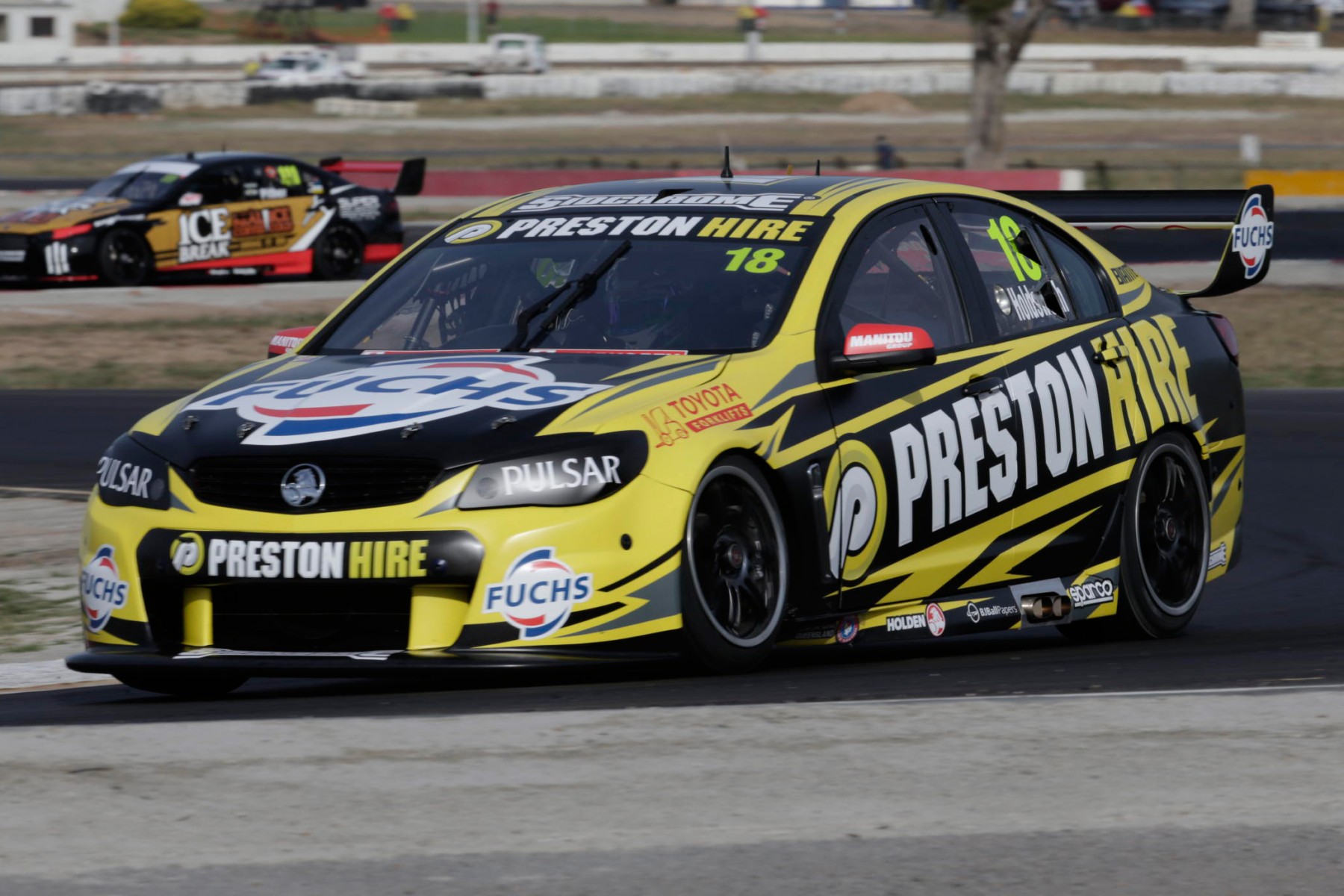 Preston Hire Racing has the assistance of Triple Eight’s Grant McPherson at Winton today, as Lee Holdsworth and his crew test the #18 Holden Commodore for the first time.

As part of the team’s customer arrangement with Triple Eight, McPherson joins Holdsworth and head engineer Jason Bush on-track as Holdsworth gets a feel for his new race car.

“It feels strong – feeling comfortable is the main aim of the day, to get the ergonomics right, feel comfortable in the car, and get familiar with the different driving style,” Holdsworth told v8supercars.com.au.

“It’s a little bit of a different car to drive – in a good way.

“It’s probably going to take me a little bit to get used to, to be honest, but we’re doing consistent times at the moment, we’ve made very little changes to the car … and if we can make it nicer on entry, I think there’s still a fair bit of time in the car.”

Holdsworth was pleased to have McPherson assisting the group for their first outing. He and Bush worked side by side in the Walkinshaw Racing garage last year, with Bush running Tim Slade, so both are adapting to the nuances of the Triple Eight car.

“We’re just trying to get a better knowledge of the car for Clipsal – obviously you need your tools for your changes at Clipsal and know what each one is going to do so, we’re trying to build up our knowledge base at the moment," Holdsworth said.

“He [McPherson] has given us good suggestions to try today, they’ve tried throughout the past year.

“The car’s a little bit different in the front end for us, to what they’re running at the moment – so it’ll be good to see how it reacts.

“I think it’s huge for Bushy to have him here and know what their main tuning tools are. It’s great having him down here, I couldn’t have asked for a better group of people to have here.”

McPherson – who will engineer Shane van Gisbergen this year after assisting Craig Lowndes to second in the championship in 2015 – enjoyed the chance to help Preston Hire Racing and see the new Winton surface for himself.

Teams are learning about the newly laid surface and grappling with high temperatures in and out of the car.

“I knew half the team of individuals already so there’s some familiar faces and people … it's just good to see them go about their business, to help out with the car and help Lee and Jason get up to speed with the Triple Eight chassis,” McPherson said.

“The most interesting thing is the resurfacing of the track and just seeing how that’s going to behave today.”

After three hours of testing time, Holdsworth had recorded the 11th fastest time, a 1min22.7304. Sixteen V8 Supercars Championship cars are out on track today, and 11 Dunlop Series racers.

Holdsworth is looking forward to having a red hot go this afternoon on better rubber.

“The potential’s there, we just have to keep working away at it, stick to our program and put some decent tyres on at the end of the day and see where it’s at,” he said.

Lee Holdsworth  ›
Stay In The Know
Sign up to the Virgin Australia Supercars Championship Newsletter
We use cookies to ensure that we give you the best experience on our website. If you continue to use this site we will assume that you are happy with it.Ok