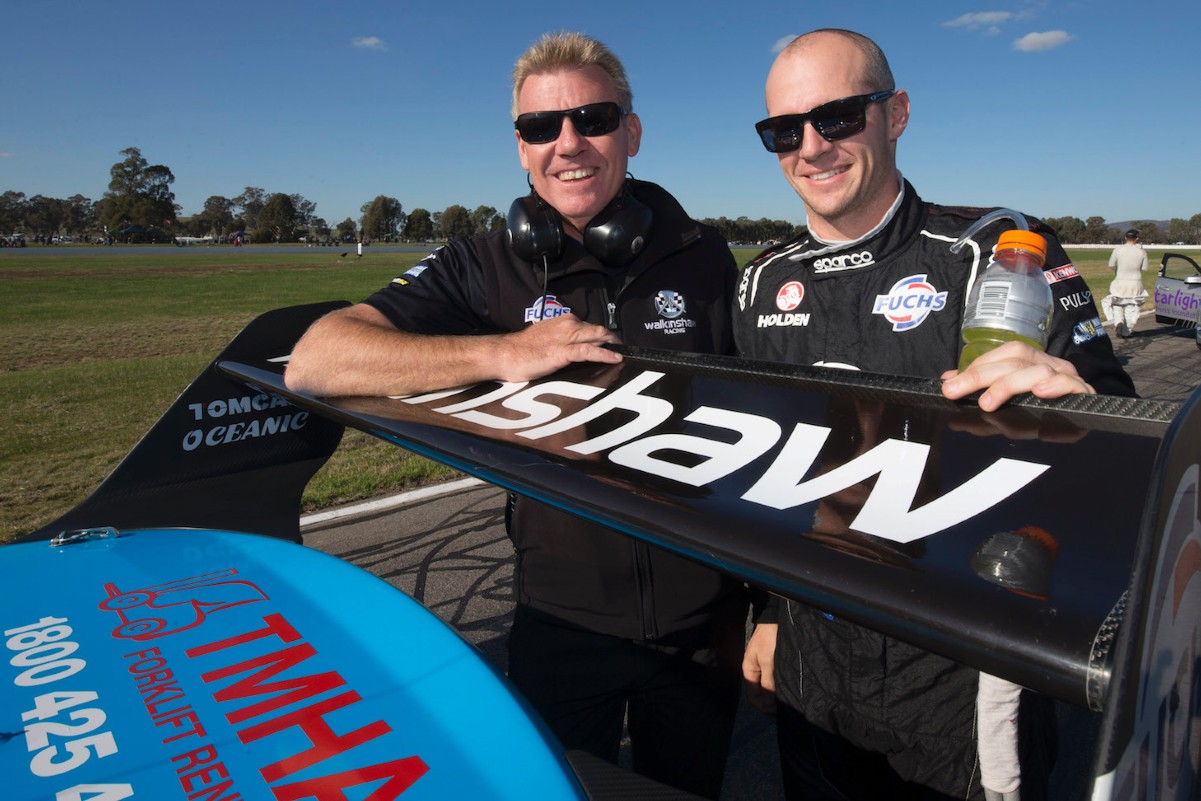 The 2015 ‘Driver’s Driver’ Lee Holdsworth will fulfil a long-held dream when he races a Triple Eight Race Engineering Holden Commodore in the 2016 V8 Supercars Championship.

But while he is excited about the prospect of getting to grips with the dominant chassis in V8 Supercars, Holdsworth is also aware driving a car built by Triple Eight brings with it serious performance expectations.

Triple Eight chassis have won the last six teams’ championship and every drivers’ championship between 2008 and 2014, finally knocked off this year by Prodrive Racing Australia’s Ford Falcon FG X driven by Mark Winterbottom.

But after three challenging years at Erebus Motorsport and Walkinshaw Racing, Holdsworth says he is confident he can deliver for forklift magnate Charlie Schwerkolt’s new Melbourne-based single car team that veteran team manager Jeff Grech has returned to the category to set up.

Holdsworth, who was announced as the first annual ‘Driver’s Driver’ at the V8 Supercars Gala last Monday night, will drive a Triple Eight-built Holden Commodore VF with technical support provide by T8 in much the same way as it does for Tekno Autosports.

“Getting into a Triple Eight car is something I have dreamed about since I started in V8 Supercars. They have always been the benchmark,” Holdsworth told v8supercars.com.au.

“In saying that I know it’s not going to be easy because this category has been so competitive and there’s already a number of Triple Eight cars out there in the field.

“So for us to be running even top five we have to do a better job than a few other people who have got those Triple Eight cars. And it’s not just Triple Eight out there; you’ve got Prodrive Racing Australia, Holden Racing Team and a few others that are punching well up the top there.

“So we really need to do a good job.

“But I am certainly excited about jumping in one. It’s been something that I’ve been wanting to do for a very long time.”

There will be seven Triple Eight Commodores in the championship field in 2016; Jamie Whincup, Shane van Gisbergen and Craig Lowndes in ‘factory’ cars, while Holdsworth and Tekno’s new signing Will Davison will be driving customer cars.

Lucas Dumbrell Motorsport will also run two T8 cars in 2016, but the level of technical assistance they will receive is yet to be confirmed.

Holdsworth made it clear that the car alone would not deliver the results; the team Grech was building on Schwerkolt’s behalf would also be crucial. And so far, he says it’s looking good.

“I have never been in a position like this where I have had a huge involvement in a team,” the 32-year old admitted. “Having Jeff and Charlie liaise with me every day as to what they are up to and giving me updates about what they are up to gives you confidence that the right team is being built around you and you’ve got the right level of support around you because the people at the top really care about your input.

“That’s given me a massive level of confidence going into next year.

“As a driver you really need a good group of people around you, a group that supports you and a group that makes you feel like you are part of it and that’s what we will certainly have in 2016.”

“The year didn’t go to plan,” he admitted. “The fourth car wasn’t ideal. You probably don’t get the support that’s required as a fourth car.

“I probably didn’t realise that was the way it was going to be because I have never been in that situation before in a fourth car. But I certainly learned a lot during the year and I think I have definitely come out of it a better driver in the end. So there are positives to take from it.”

Being voted ‘Driver’s Driver’ surprised and delighted Holdsworth. Each drivers was asked to nominate their top three rivals in the championship using respect, ability, sportsmanship, on track conduct and off track conduct as the criteria.

“It was pretty special and it was a nice way to finish off a pretty hard three years and go into the break with a boost to the confidence before next year,” he said.

Holdsworth will be commencing his 11th full-time V8 Supercars season in 2016 and be aged 33. He is confident he can add to his three career race wins and better his seventh place finish in the drivers’ championship achieved in 2010 when he was at Garry Rogers Motorsport.

“I feel like I am driving as well as I have ever driven and I have learned a lot through the last 11 years – a hell of a lot. To think 11 years ago I was starting and had hardly any credentials behind me is just unbelievable.

“To see how far I have come and still be involved in the category is something that I always dreamed of when I was young, but there is still a lot I need to tick off for my career to be satisfied. But I still feel like I have a lot of time left in the sport.

“This is a massive opportunity and I am certainly looking to make the most of it.”