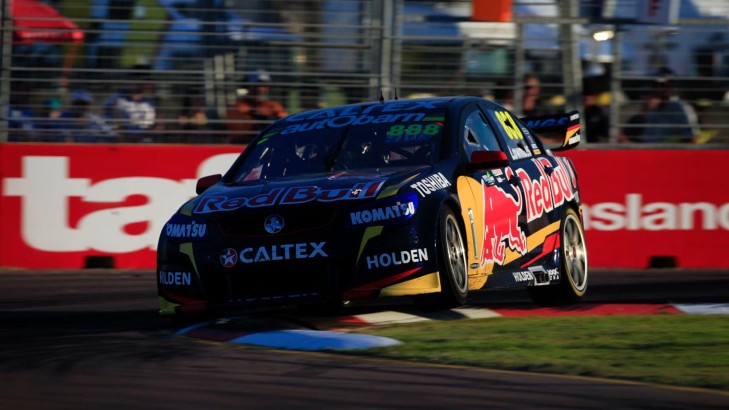 There will not be a penalty for Red Bull Racing Australia after a pitstop was put under the microscope during today's Race 22 at the Castrol Townsville 500 - Driven by TAFE Queensland.

Craig Lowndes qualified third on the grid and was well positioned early, but his lap one pitstop came under scrutiny when the team's car controller was seen to move a tyre.

While, of course, there were different views on the incident from different garages, team boss Roland Dane believed the tyre being moved for Lowndes' safe passage did not breach the rules.

However, the stewards have deemed it legal, after taking time post-race to assess rather than attempting to rectify the situation during the race.

Lowndes had a shocking weekend in Townsville, failing to finish a race yesterday and on the bigger points-paying Sunday suffering from engine issues, which saw him have to weave in and out of the pits seventimesthroughout the long race.

Consequently his Championship challenge has gone from being second to sixth over the weekend, after having a 165 point deficit to leader Mark Winterbottom at the preceding round in Darwin.

Now Red Bull teammate Jamie Whincup sits second and Lowndes has plenty of work to do to get back to the top of the points.

It is not the first time this the team has been under fire for the car controller's actions during a pit stop - at the Clipsal 500 Adelaide, the season opener, the car controller touched the front of Whincup's Holden Commodore, which was deemed to be 'working on the car' and in breach of the rules.

Whincup was handed a drive-through penalty that put him out of contention.

Click here for the Stewards Summary, which wraps all of today's V8 Supercars incidents.

Whincup storms back in Townsville

Craig Lowndes  ›
15' Red Bull Racing Australia ›
2014 Castrol Townsville 500 – Driven by TAFE Queensland  ›
Stay In The Know
Sign up to the Virgin Australia Supercars Championship Newsletter
We use cookies to ensure that we give you the best experience on our website. If you continue to use this site we will assume that you are happy with it.Ok